One door closes, another opens

Big developments for my own musical career 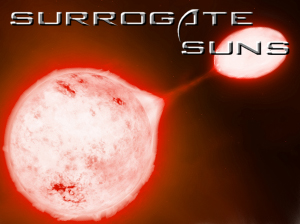 At the start of 2013 I was in two bands. One was Surrogate Suns which I had been putting together for the previous six months and which I hoped would take me back out on the road on a similar circuit to that of Led Zep Too.
The other was Badly Worn Toy (not a tribute band) which I didn’t expect to be doing anything more than a few local gigs for fun and a few beers.

One key factor in my reasoning was the amazingly talented Harvey Hudson. He is the guitarist in Badly Worn Toy (which I will continue to refer to as BWT from now on). I had deliberately avoided having him in Surrogate Suns (SS) because I think he is destined for greater things than being stuck in a covers band with some old bloke in his late forties (Me).

As it happened, SS lost our keyboard player unexpectedly. He had things he needed to sort out and with extreme regret and profuse apologies he pulled out of the band. The rest of us agreed to sleep on this and decide what to do the next day. On the following day the Rhythm guitarist quit followed almost immediately by the Lead Guitarist, and Drummer. That left just myself and the bass player who as it happens is also the Rhythm guitarist in BWT. (I said the music biz incestuous in North Devon didn’t I?) 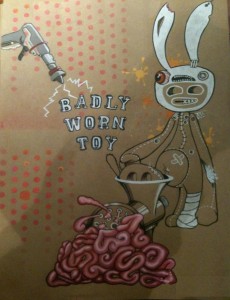 So the Surrogate Suns had burned out (not gone supernova because that would imply something explosive and this was more of a fizzling out) and all I had to look forward to was BWT.

Now I had not thought of BWT as a serious band. Yes true we had already done two gigs, after only a handful of rehearsals. We had succeeded in playing Nights In White Satin on the first attempt in rehearsals, and (more recently) jammed a significant chunk of Sultans Of Swing without anybody having been told in advance that we might want to learn it. It was just that we hadn’t had any plans beyond playing a few gigs and having a laugh. There was no website, no facebook page, and no wild ambitions being talked about. With regular rehearsals for SS, there hadn’t been any for BWT for a good long while.

Nevertheless since it was now my only band and my only potential outlet for singing full gigs, I decided I had to put my all into it. We had to wait until Harvey returned from holiday abroad first, so our first rehearsal (since last year) was on Thursday just gone (7th Feb) with another on Monday 11th.

I raised the question of maybe writing a few songs of our own and was met with a torrent of interest. Harvey played a number of riffs that could well be turned into songs, and Gareth confessed that he would like to have a 100% original set.

I next raised the question of perhaps setting up a facebook page, and a website, for the band and again the response was enthusiastic. So you can now visit the official facebook page for Badly Worn Toy by clicking the link.

The website is already under construction and is currently piggy backing on one of my other websites, until I am ready to launch it properly.

The good news from my point of view is that we plan to write new material. If that is the case then I feel a lot better about having Harvey Hudson in the band. He is an amazing guitar player, who can replicate some of the hardest guitar parts in classic rock and prog at the drop of a hat, and can even replicate keyboard parts from bands like The Doors, Moody Blues, and Pink Floyd, with considerable authenticity. Harvey should be raised up and adored by millions. He has more muse than Matthew Bellamy, is a machine gun to Jack White’s blunderbuss, let’s face it he stomps over pretty much any currently active famous guitarist you can name. You need to go back to the likes of Jimmy Page, and Jimi Hendrix to find comparable  players, or delve into the realms of the unsigned world and exponents like Troy Faid, to seek anyone of similar ability. As a matter of fact there are numerous amazing guitarists around the world who never get heard by the masses, but that is the fault of the music business.

He also write, unconsciously, all the time. His solos often stray from the original (although he plays the signature parts when they are needed e.g. for cues) and during those solos he is extemporising prodigiously and with pleasing results.

With BWT because we have not rehearsed all that much we still have moments when Gareth thinks we are about to finish but Harvey carries on, or the other way round, and yet the pair of them quickly cover the error with a perfectly plausible sequence that often sounds as though they had rehearsed it that way.

The band have already got several gigs lined up, with the next being this Friday 15th Feb (day after tomorrow at the time of writing) at The Lamb Hotel, in Ilfracombe. and another in Barnstaple (Venue TBC) on Saturday 23rd Feb.

BWT are back in Ilfracombe on 16th March as part of the Con-Tribute festival, and will without doubt be playing many more dates in and around North Devon before hopefully moving onward to play further afield as well.

Once we have original material recorded I will be approaching certain radio stations that I know will play the songs, and a few more that might. So hopefully we will be getting a reputation worldwide and be able to tour at least all over England. Who knows? We shall just have to wait and see.