and this time he is bringing his band as well

Hyperbole hy·per·bo·le (h-pûrb-l) n. A figure of speech in which exaggeration is used for emphasis or effect, as in I could sleep for a year or This book weighs a ton.

I really do not like hyperbole, so I tend to avoid saying things like the greatest, the best, unbelievably brilliant, etc etc.
It is a sad fact about our language that advertisers, and publicity merchants over use such words to the extent that their meaning is watered down.

So when trying to describe Troy Faid it is difficult to find words that can convey what to expect.

Words like “unique” and  “special” are just as often used to describe people with Aspergers (which I have) or similar. “Incomparable” is sort of a lie, since everything can be compared to something, Troy has already been compared favourably to Django Reinhardt, Robert Johnson, and Freddie Phillips.

If you claim that he is the best, the greatest, the most talented, or anything like that, it is purely subjective. Someone is bound to argue. 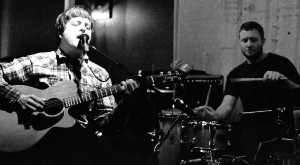 What I will say is that, since seeing Troy play live, last Christmas at The Lamb Inn in Ilfracombe, I have been spoiled. No longer is the prospect of some person strumming chords and singing songs (original or covers it makes no difference) of so much interest to me.
Don’t get me wrong, I wouldn’t condemn them for being able to do something which is still way beyond me, but every time I see them I wonder why they don’t play rhythm AND lead at the same time?
Why don’t they pick out 32 notes to the bar, while singing, and knocking out a bass line with their thumb?

Because what Troy Faid does is makes playing the guitar look pathetically easy. Before he came, I was playing his songs to anyone who would listen. Even as I told them that “Last Week’s Tune” was just one man with ten fingers playing one guitar, I still wondered, I still had my doubts; could it be that he had double tracked the piece, and would not be able to recreate it live?
Well I was not disappointed when he turned up and did indeed play that piece and many more, absolutely note perfect, and without any cheating; in addition he did all this whilst drinking pints of Exmoor in prodigious quantities before during and after the set.

He had in fact already had sufficient alcohol to have rendered me tipsy before we even went down to the venue, so it is a testament to just how easily he sings and plays that he performed so brilliantly.

Troy returns to the town this time with his band, and appearing at The Sandpiper Inn, on the Quay.
Entry is still free.

Troy has two albums out now, the first is “Last Week’s Tune” and the latest is “Solus” both can and should be purchased directly from his website at http://www.troyfaid.co.uk/shop.html

Troy continues on his Devon quest, the following day Saturday 11th May, when he appears at the Dartmouth Music Festival, the vast majority of his gigs are still in Yorkshire but hopefully as more and more people catch on to his unique and special talent (previous comments notwithstanding) he will be on tour almost constantly across the UK.