Tankus The Henge – Album review The Last Days Are Coming

Review of the debut album from Tankus The Henge

Regarding the album title,

I am inclined to edge towards accepting it as the band’s eponymous debut album, but | do think that the alternative is a good title for it. Certainly, if some crazed tin pot dictator starts letting off those big roman candles with the nuclear warheads, you could do a lot worse than spend your last hour in this life listening to Jaz Delorean and friends’ premier studio offering.

I bought my copy at the band’s gig in Appledore see here for review
It is a good thing to buy your unsigned music directly from the band, rather than on iTunes, or Amazon, if at all possible. The band will almost certainly make more money from it that way. Just as long as you DO buy it. Details of where to buy Tankus The Henge (or “Last Days Are Coming“) at the end of this post. 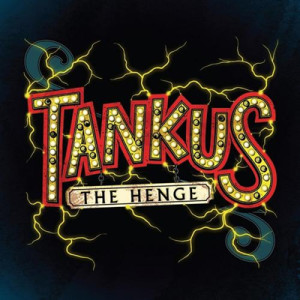 Now you know the old saying that track 7 is always the best track on the album? OK, well whether you do or not, there always used to be an assumption that track seven was the stand out track. Usually the album would open with a strong number; the last track on side one, and the very end track were good as well.

Well Tankus The Henge have put their best song right at the beginning.
“Who’s Gonna Catch Ya“ is a tale of thrills and spills on the high wire of life, walking the tightrope between a fiery redheaded girlfriend and holding down a job that is quite literally a balancing act, with your life on the line.
From the very first piano notes that follow the scratchy sound of a record needle in the groove to the dying bars, there is action aplenty. “They’re laughing, they’re laughing they’re laughing at ya!” sing Jaz with the whole band belting out the stomping melody. “She’s got you trapped under her spell” could almost describe the album itself which will after only one listen leave you plagued by earworms until you can get back and give it another spin. It is pretty upbeat from start to finish. 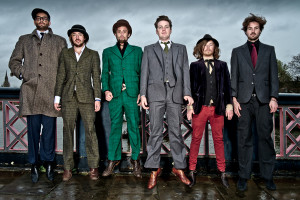 Track 2 however, starts off very gently and then slowly develops into quite the most outstanding song you ever hope to find as the second track in to any album. Easily the superlative track on the disc, “Smiling Makes The Day Go Quicker“, is a song of hope. Things may not be going too well for the protagonist of the song, and indeed there may well be “No show tonight” but “smiling makes the day go quicker, life begins to turn around” however you are feeling, however much crap life is throwing at you, you can always make it seem a lot better by smiling broadly and singing this song. 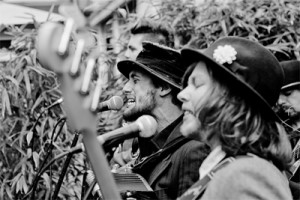 “Home is where you hang your hat“, is the opening line, and title, of track 3 which is a jolly bouncing little number that, you begin to realise as you listen to it, is the most accomplished and excellent song on the whole album. With a lovely little guitar solo, and then dropping down in tone with just an almost whispered vocal back by muted horns, before building back up to the unstoppable march of the main tune. 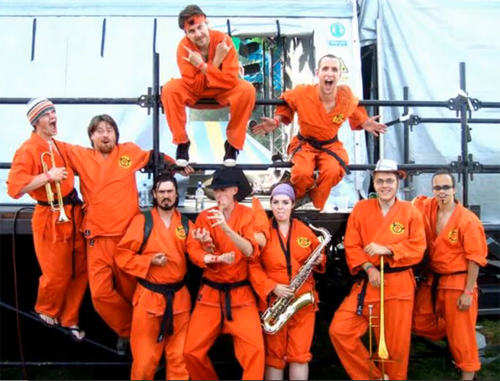 Bison are another band who seem to think that Orange Is The New Black.

Track 4 makes me think of a completely different band “Bison” as the title is “Orange Is The New Black“ and Bison appear to have orange as their official group colour.
In many ways, I feel that Bison and Tankus The Henge have a lot in common, whilst somehow being musically quite different. True there are hints of ska here and there in TTH, but they are much more influenced by gypsy music and fairgrounds than Bison. Bison take ska and twist it around into other genres, while still keeping the basic form there.
Interestingly, as I listen to “Orange Is The New Black” with its constant changes and mood swings, I must conclude one thing, that this is quite simply the most consummate track on the whole album. 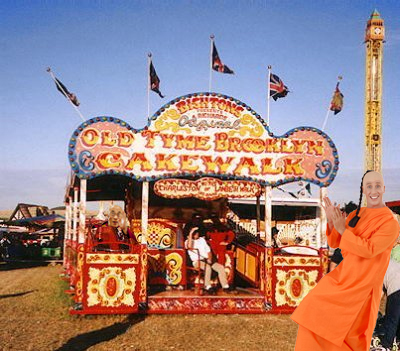 From the very first little drum fill and the inescapably bouncy intro to “Cakewalk”, you cannot help but be caught up in the excitement of finding the unsurpassed brilliance of track 5 on this album of superlatives. Lyrically it is such tremendous fun, “Cakewalk cakewalk I met the Dalai Lama on a cakewalk straight talk his hand is on my shoulder so I turned around turned around and looked into his eyes and saw the world.” all delivered in a kind of stream of consciousness way somehow fitting to the tune perfectly, and making sense, despite seemingly lacking any punctuation. As the track fades with the line “The sun keeps moving on” repeating you can almost imagine, Jaz, skipping along between Mahatma Gandhi, and The Dalai Lama, with their arms interlocked, dancing into the sunset, like some delightful Hollywood musical, featuring Bob Hope, Bing Crosby and Danny Kaye.

The absolute top track is however track 6, “Lying” which is a slow and melancholy number. While most of TTH’s songs are pretty upbeat, this one is exceptionally introspective and thought provoking. The guitar solo is particularly melodic and delightful. It comes to a false ending and then the horns take up the refrain and you can hear just how much musical craft goes into all their songs.

Now we come to track 7 which is always the outstanding track on any album and Tankus The Henge makes no exception. It is probably the most upbeat of all the best songs here, opening with what is I am quite certain, violins, although when I saw the band live they did it with the brass section.
“Recurring Dream” tells a story with which we are all too familiar, of waking up having had a strange dream and not having the slightest clue what, if anything it is supposed to mean. In this case the main theme is one of falling, in fact of deliberately jumping off buildings and smashing through skylights, with a host of other events unfolding such as knocking back tequilas, and dancing with skeletons, to name but two.
The unremitting bounce and zeal of this song is enough to do in the most energetic of dancers at a live event, and even at home, it is with a certain amount of gratitude that it is followed by something slightly more downbeat.

“Life Is A Grim Tale“, track 8, opens with probably the most circus feeling instrumentation, and the lyrics follow with plenty of circus references. Although the lyrical content and the musical feel is macabre, and really rather dark it is still apparent that this song knocks everything else on the album into a cocked hat. Alright yes, the lyrics do say “your days are numbered, well you never know how many left you’ve got, ’cause you probably haven’t really got a lot” BUT on the plus side you do get to “scream at the top of your voice” so what the hell :  enjoy!

Track 9 opens very slowly with the bass, joined by the drums, and then some incredibly moody blues keyboards. The vocals are understated, whispering slow and insidious. “Riddles” is arguably the most lyrically unfathomable of all the tracks on the album. But yet, just as you think that for once here is a track that is NOT the best track on the album it sneaks up on you, quietly, and subtly, until once again you are forced to admit that you are listening to a tour de force, unparalleled in it ethereal beauty.

Then you are hit with track 10 “Deviationist Society“, which opens in an understated way with something that sounds like two cellos, one played pizzicato; this then makes way for a wailing harmonica, that begins to evoke a bygone era of steam trains rolling across the prairies as cowboys open up the west. The song features gunslingers and cardsharps, face scarves, and fights on trains. Really Tankus The Henge have mastered the art of painting a picture with words and music. A picture may paint a thousand words, but words and music combined can make that picture move. It takes a few listens before you come to appreciate that of all the tracks on the album this is the supreme and most worthy offering.

You are now at the end of the album with track 11, and I am sure you will not be surprised that with ten superlative songs, each one the best on the album, Tankus The Henge have still been able to conjure up a miracle by saving the best till last. “The Last Days Are Coming“ which I am sure is not supposed to be the title track even though my media player seems to think it is, is a mid paced romp, it really is a lets-get-round-the-paino and have a right-old-sing-song lads. Jazzy horns counterpoitn the stomping melody of piano and vocals as the band celebrates the end of the world in the only way that makes sense, by drinking the bar dry and having a right old knees up. After all, if there is nothing you can do about it, what is the point of being miserable eh? Smiling makes the day go quicker mate, don’t forget that.

The band’s official website is http://www.tankusthehenge.com/
There are links there for iTunes and Spotify, as well as a SHOP page where you can purchase the hard copy of the album.