Buy the album Dollhouse by Anielka for ten euros

I haven’t talked about Anielka on the blog before. She was one of the original artists for the Let’s Get a Genuine Unsigned Band Into the Charts competition in 2010. Her song “Rain Is Me” created a lovely counterpoint to Daylight Saving‘s “Sunshine Is A State Of Mind” Anielka was one of the final top ten artists who, along with Bill Monaghan, gave the whole competition an international element. 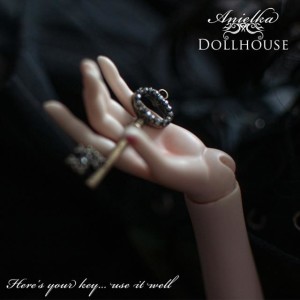 Anielka’s second album “Dollhouse”, was completed two years ago, but no record companies were willing to consider releasing it, so Anielka went the unsigned route again. As is so often the case the process of putting the album into the public domain was like swimming through treacle. The bigger radio stations won’t play it because they are beholden to the big record companies, and record pluggers. You can’t afford the cost of advertising, record stores won’t stock it, and online retailers will stock it but their customers would have to be searching for it specifically to find it. TV won’t cover anything unless it has become a global phenomenon so the album languished like countless others.

So Anielka and her band including her husband, bass player Rauyes Veneranta came up with a radical alternative. This is what they are asking people to do.

Download the song material from Soundcloud  for free. The cover material can be viewed & downloaded from Facebook’s “Dollhouse” photo album.

After this, go for a walk and use the money to make someone happy, someone who is desperately struggling with life and/or finances. It doesn’t matter if you know the person or not, or how you do it… give the money to a homeless person, or to a charity worker who stands in the same corner every day, collecting donations… take a lonely or depressed relative out to coffee or buy flowers… be creative.

Maybe donate the money to a busker. Especially if, like this one, they are raising money for charity using contactless payment technology. See LBC website blog. http://www.lbc.co.uk/the-busker-who-takes-credit-card-29047

We can get by, but there are so many people out there who can’t. Let’s reach our hands out to them, and tell them that they are not forgotten.”

They continue by saying

We feel that the album’s theme fits well with this: after all, the story is about a journey through the storm of depression and desperation, and back into the light again. The heart of the album is a 20-minute “rock symphony” consisting of an intro, four songs and four bridges. It is called “the journey to the innermost”.

And if you have contacts to radiostations:

If you think that the music could fit into your radio show, feel free to play it as much as you want. All we ask is that you would include the message in some form, along with the soundcloud address, when you present the songs… to us, spreading the message is the most important part about this. Let’s try to create something good in the midst of all the bad news going around.

I think this is a lovely idea, along the lines of the idea of buying a cup of coffee in advance for a homeless person who might come in later for one.

Let’s all give it a go, and spread the word further.