Review of the Landmark Beer Festival 2013 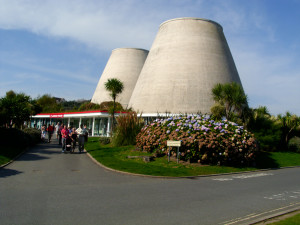 The Landmark beer festival is an annual event that takes place at Ilfracombe’s iconic Landmark Theatre. The bands perform in the Pavilion; a 250 capacity circular venue with large doors opening onto the lawns where they have a barbecue craft stalls, and bouncy castles etc. Inside in the Rendezvous cafe is the normal bar, plus the temporary set up with dozens of real ales and ciders available from the keg.

The bands are always of a very high standard, and come not only from Ilfracombe and the North Devon region but also from across the country.

This year’s line up was as follows 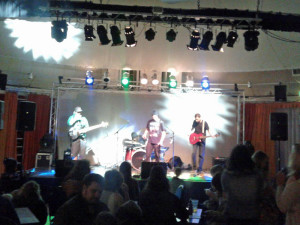 Odds & 8 Balls opened the proceedings on Friday evening with an excellent set. Of course I have seen them before, (Matt + Dan)2 are all friends of mine since meeting them, and jamming with them, at the Chill Bar when I first moved to ‘Combe. They are regulars in and around the town and were no doubt well supported by the locals as well as visitors.
They certainly looked comfortable on a proper stage, with a full on light show, and they certainly seemed to be enjoying themselves. The audience were appreciative as well, and the beer was flowing well.

Inevitably I couldn’t get to everything that was on. Family commitments, and demands of work, meant that I only came in towards the end of The Tuesday Syndicate’s set, so I can’t comment on either of the first two acts of the second day. 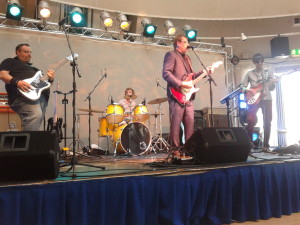 The Rivals, mod covers and originals

The Rivals however certainly impressed me, with their frenetic covers of Mod classics from The Jam, Small Faces, The Who, Stones, Yardbirds, and more, as well as a number of original songs which did not seem in any way out of place alongside those illustrious Mod Gods.

I had immensely high expectations of Wille and the Bandits, but I confess I was underwhelmed. That is not to say that they were not good. Far from it; they seemed tremendously professional and musically adept. I had just built up my hopes that they would also be great fun and would draw the audience in with their own passion, but to be honest, it just felt like they were on autopilot. My 11 year old son was adamant that he wanted to stay until the end, despite clearly being tired. Eventually after he had been asleep for several minutes on my lap, I insisted on taking him home. I was dozing off myself by then. 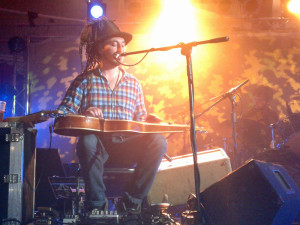 Guitarist/Singer of Wille and the Bandits

I bought a CD from the band in the interval, hoping that maybe I would get into the music by being able to listen at home to a studio recording but after playing it once I have not bothered to put it on again.

During their set the security had to speak to a group of young lads who were behaving in a very childish manner and causing disruption to me and to others. The problem was dealt with in a mature way by the staff. Shortly afterwards they had to ask some other people to leave who had brought large bottles of drink in with them. Considering this is a free festival and can only afford to pay the bands and staff out of beer sales, this is a perfectly reasonable policy, and was carried out firmly but politely and professionally by the security staff who were a credit to the theatre. 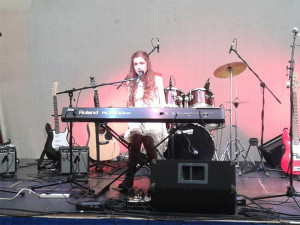 Kiera Osment, transcendent vocals, especially from one so young; equally at home with guitar or keyboard.

On Sunday I caught about half of Kiera Osment’s set. She really impressed me. This is the first time I have seen her perform live. I missed a couple of opportunities before now.
I did see her short appearance on local TV where I understand she had a sore throat, and as a result was less than amazing. So it was the complete opposite of Wille and the Bandits, I had fairly low expectations and was pleasantly surprised by the power and control in her voice which was comparable to Leona Lewis in my opinion. She also plays guitar and keyboards with a very high level of ability and of course most of her songs are her own compositions. She is certainly one to watch. 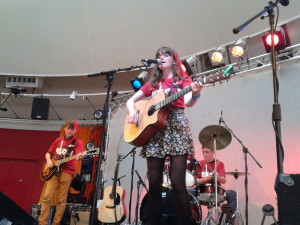 Band of Roses, formed by participants in the “Ilfracombe Rocks” scheme.

Ilfracombe Rocks, is a scheme to teach local youth to sing and play musical instruments in a rock and pop style. The standard is very high and shows that the town’s tradition of producing top notch musical talent is in no way diminishing in the next generation. In particular “Band Of Roses” the three piece band that I have mentioned before, were on song once again.

I dashed home for a bit and then, much to the dismay of Psylum’s lead singer Kelly, I was a bit late for their set. However she still managed to drag me on stage to humiliate myself singing a couple of songs with her. It was good fun really. I’m not going to review Psylum or Falling Apart because you know I already like them. Like Odds & 8 Balls, they clearly enjoyed having a big stage to move about on.

More parenting duties meant I couldn’t see Richard O’Brien. Then on the Mondy my own band was playing at The Ship and Pilot from 1.00pm until 4.00pm so I couldn’t see Peter Crawford either. 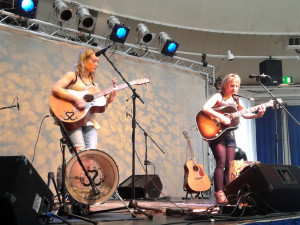 Two thirds of Sound Of The Sirens, performing at the Landmark beer Festival May 2013

I was most looking forward to Sound Of The Sirens, at 4.30pm – in fact I had deliberately changed the timings of Badly Worn Toy’s gig from a two o’clock start to a one o’clock start so that I wouldn’t miss them.

This time however I was not disappointed. The three piece girl group was one short because Lisa (I think I have that right) had to be in London early the following day. However the loss did not detract noticeably from the beautiful melodies, and intricate musical creativity that is Sound of the Sirens. 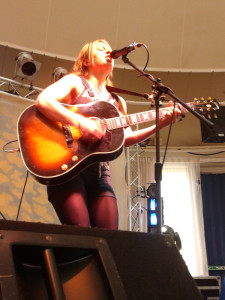 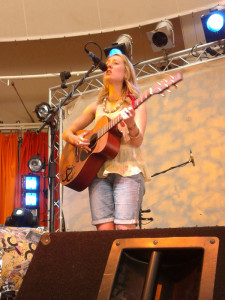 The stomp box was replaced by and actual bass drum which was deftly hoofed by Abbe and Hannah in turns. I sang along to Shoelaces, and enjoyed a number of songs I was less familiar with, and generally had a great time.
The audience was a bit thinner than I think they deserved but the hundred or so who were there were very appreciative.

That ended up being it for my weekend of music. I have heard loads of good things about Zamba but once again life got in the way of music.