An example from real life of a clever PR turnaround 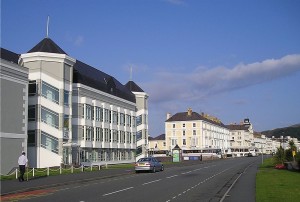 A facebook friend of mine, Andy Bellis; lead singer with Welsh independent band “The Uninvited“ was queuing for a gig at “The Venue Cymru” about a week ago. He and a friend had already bought and paid for tickets in advance at £18 each, to see “The Vaccines“ but as they approached the entrance they were pulled aside by security who asked them if they could name The Vaccines lead singer (I still have to look him up, it is Justin Young) They were also asked to name the band’s two albums, all of which they failed to do. As a result they were refused entry to the gig with no apology and no refund and apparently no recourse to law.

Andy was understandably furious and posted on Facebook about the situation. Lots of people suggested he should contact the local paper, and radio. Others suggested getting in touch with national dailies and “The One Show”. 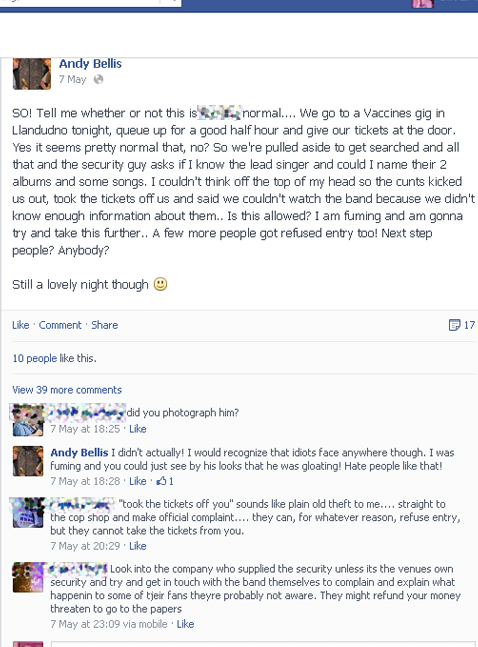 Extract from Andy’s first status about this incident. Many of the other 39 comments were saying that as he had no recourse to the law, but that he had been morally mistreated, that he should contact the media.

He did contact a number of possible media, and the NME picked up the story. Within a day of the story appearing on the NME website it had spread across the internet to numerous blogs, and even to major national daily newspapers, like The Independent.

Andy’s friends and fans of The Uninvited joined in spreading the story as much as possible, not because they saw it as a PR opportunity but because they were rightly outraged and indignant that somebody could be refused entry to a gig just for not knowing details about the band.

One of Andy’s friends posted this image with the message ” if I was a Fed on a mission and was given the below pic on some sort of fed test and asked ‘which one was the pick pocket?’ ??????”

The venue, for their part, claimed that they were trying to stop pickpockets from entering the gig, they were profiling gig goers and picking on those who looked dodgy. Andy is the lead singer in a rock band so of course he looks dodgy, but that doesn’t make him a pickpocket. In fact, if I were going to pickpocket people at a gig I would dress expensively, to divert suspicion; AND now I would learn the name of the band’s lead singer.

So where does that leave our story. The media feeding frenzy was genuinely building now, the story got onto BBC Radio 5 Live and MTV, and was trending on Facebook and Twitter, The Venue had apologised publicly, although they still had not made their apology personally to Andy, and were still claiming that they had made other concert goers safer by stopping pickpockets from entering the venue, (see their statement) a claim that is patently false since they only rejected six fans, all of whom claim to have been victims of unfair treatment.

The new reached The Vaccines management :  and it should be made emphatically clear here, that The Vaccines, and their management had no knowledge of this incident, or the profiling policy that led to it.

There is talk now of a possible support slot for The Uninvited although this may be a case of counting unhatched chickens at this time, however, stranger things have happened, and the fact is that this story has been bubbling along on the “www” and even on national radio, and local press, radio, and TV; and the positive publicity that The Vaccines would gain would give them significant kudos and media coverage.

As for Andy Bellis and “The Uninvited”; well, obviously it would more than make up for the bad thing that happened to him. And the red top dailies like The Sun, and The Mirror, would have lots of fun with Andy’s band name in the headlines.

I for one, really hope it happens. Meanwhile, try not to buy tickets for events at The Venue Cymru, and if you really must, make damned sure you know details about the performers you have paid to see, especially if you are planning to pick pockets while you are there.