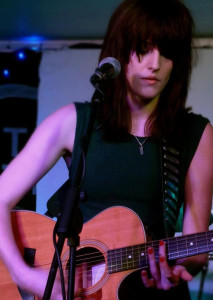 Hailing from the Bristol area, Nailsea to be more exact, is this young and unconventionally beautiful singer, songwriter, guitarist, and band leader.
Her songs often evoke an era that she is far too young to remember with jazzy overtones, she herself admits to taking most of her musical inspiration from Ella Fitzgerald, thank goodness for recorded music eh?

I think the first time I heard of her was via XRP radio, and if I am not very much mistaken she was involved in Wes White’s excellent “Storm The Charts” campaign in 2010. This was an attempt to fill the top 40 with singles by unsigned bands, you may remember not reading anything about it in the papers and not seeing any interviews with successful unsigned bands on the One Show. But believe me, it was not for want of trying, and the campaign even got the support of Jon Morter, the man behind the campaign to get Rage Against The Machine to Christmas number one in 2009. 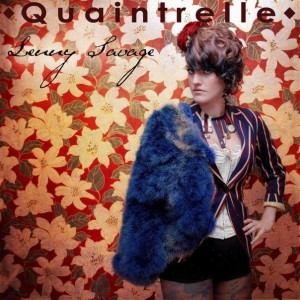 After hearing one of her songs, I think it was “Pear Shaped Girl” on unsigned radio, I decided to buy the MP3 version of her album Quaintrelle

on Amazon. As is so often the case, I don’t regret it and every track is great.

Opening track “Carzy” is a bit of a stand out number as you would expect. It has a lovely slow tempo, and lots of light and shade, the verses being so laid back they are practically horizontal; a strum on acoustic guitar; a little piano tinkling; almost whispered vocals, while the choruses are heavy and lush with everything thrown in. In short like a musical split personality, as if a pop/jazz band was playing grunge.

Track four is another personal favourite, I will review the whole album at another time, but this one kicks off really bouncy, and captures that up tempo jazz sound that recalls the roaring forties, similar to the kind of thing that Caro Emerald is doing.

Lenny Savage is not just limited to the one young lady. She is also ably backed by a band consisting of  Daniel Puzey, Chris Flange, Matt Venn & Paul Field. At present there appears to be only the one CD available, but there are clearly many more songs that could form the backbone of the follow up. Presumably the usualy constraints of time and money apply, so please go and buy Quaintrelle, so that they can get stuck into recording the next one.

No website as far as I can discover. As my regular reader will know, I think this is a bad thing and needs to be addressed.