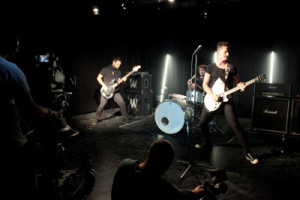 Raided by Waves, are a three piece alternative rock band from London, consisting of

One thing this band have got right is the use of the internet and social media, and also (at last) their name.

You can find Raided By Waves via their own website (Yay!!) and on Facebook which are the two most important ones to have at the time of writing.

They also have a Soundcloud page, for those of you who like .wav files. I haven’t found a dedicated Youtube channel though.

You can also find them on Songkick, and follow with them on Twitter (if you are a twit).

In fact there are more sites than I could sensibly list here that have mentions of the band, including Last FM, Spotify and Flickr It is worth noting also that they occupy the top four spots on Google for their band name which goes to show, 1, the value of a good band name, and 2, the value of creating all those back links from so many different websites.

So, about the band name. I first came across the embryo of this band at a gig in Camden. The Headline was a band called Plan Nine, who were friends of mine. JB3 was on just before them and consisted of Charlie on drums, James on guitar and vox, and had a different bass player then. JB3 is a poor choice of name for a group because there are others with the same name, and it doesn’t stand out in a Google search. The band then changed line up slightly, and changed the name to ROAM, which I am afraid is scarcely an improvement on JB3. They then stripped the personnel down to the bare essentials of bass, drums, and guitar, and finally they seem to have alighted on a name that  works, both as a searchable entity, and as a cool sounding band name. There is a song of that name by another band called “The American Dollar” but that doesn’t stop this band dominating Google’s rankings for the search term.
I asked Charlie where the name came from and his reply (via facebook messaging) was,

Well me and James was trying to think of a name for ages nothing just clicked. Raided By Waves popped up because. Ha this is our theory music produces sound waves. So when you hear our music we are raiding your head with our sound waves. That’s the whole concept behind it. It’s just clicked when we thought of it.

So what about the music, because the music is what it is all about right? Yes. So there are two tracks available on Soundcloud. “Secret Sin” and “Blinded By The City Lights”

The first has a funky bass line over Charlie’s solid drum groove. I remember when I booked JB3 to play a gig back in London, he had just acquired a Ludwig drum kit with a massive ‘John Bonham sized’ bass drum. It was so, so gorgeous and the sound of the kit was amazing. The other band playing was Buffalo (now called Buffalo Ink) and their drummer was the, very sweet, very diminutive, Caragh Campbell, who sat demurely behind Charlie’s huge kit and battered it like she was clubbing a Kraken to death with a pair of frozen marlin.

The drums have a terrific sound thanks to this same kit, and Navid’s bass playing is anything but pedestrian. James Bennet’s vocals are clear and tuneful, the whole is a massive departure from the sound of JB3, much more modern, with a dash of grunge about it, and quite soulful for rock.

Raided By Waves rehearsal set up

If I am honest, I can’t think of who this band sounds like, and I know that most bands and singers don’t really like being compared to other artists, the band themselves list the “bands we also like” section on Facebook as People In Planes, Mew, Halestorm, Zico Chain, The American Dollar, Six Hour Sundown. Which may explain why I can’t nail down their sound because I don’t personally know any of those bands.

Actually, if there is anything, it is a tiny nod in the direction of The Foo Fighters, although I reckon this is a bit more melodic and groovy, certainly it has that sort of feel in the second track, “Blinded By The City Lights. Well I just hope that isn’t taken as a mortal insult by the band. Ha ha.