Atlanta rockers with a barrel-full of soul

Wow, it was a productive night for me in the XRP radio chat-box last night as I came away with two excellent bands to tell you about. One, Billy Brown, I have posted an interview and introduction already.  The other was one of the last bands played on the show, a female fronted rock four piece from Atlanta.

It’s a great name.
Alright, true, if you Google it you get “-7” but hey;
their website is the very next thing on the list.

It is a really basic website at the moment; just the band’s logo, and a selection of links Facebook, Twitter, their press kit, email address, Bandcamp, iTunes, Zazzle, etc.

Here is how the band describe themselves

Straight-ahead rock laced with soulful, emotionally raw vocals.
The sound of this Atlanta, GA-based quartet is rooted in ’70s rock —
influenced by the music of Free, Terry Reid, Humble Pie, Faces
and Stone The Crows.
To date, the band has shared the stage with the legendary
Leon Russell, Joe Bonamassa, Blackberry Smoke, Jackie Greene,
Ike Stubblefield, Chris Duarte, Marc Ford and Trampled Under
Foot, to name a few.

Only last year I was forming a band myself which was very nearly called 67-76 which would have been the same sort of reference to, what for many people is, the golden era of classic rock. 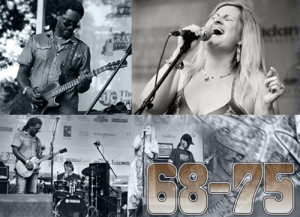 As well as the influences they cite for themselves, I would say, Big Brother and the Holding Company are in there, especially as there is a touch of the Janis Joplin about lead vocalist, Suzanne Sledge.

Suzanne is most ably accompanied by guitarist – Andrew Cylar, drummer – Eric Young and bassist – Steve McPeeks. There is some uncredited Hammond work on “Tired of Fighting” that is playing as I write this.

I bought their e.p.  “Sanctified” via Bandcamp. It is priced at a very competitive two dollars something, I forget because I just paid $5. Seemed reasonable for four tracks of this calibre.

I implore you to BUY the music, even if you only pay the minimum price, and preferably from Bandcamp because the artist gets more of the money than from any other format.
Tracklisting is as follows.

Kick off track “Got A Feeling” is heavy and rocking with a hint towards glam rock (got me thinking of a T-Rex song) but with enough substance to keep its head above the style, and enough originality to avoid accusations of plagiarism.

“Tired Of Fighting” is a good bit slower with melancholy slide guitar, evocative and bluer than a swimming pool full of blueberries.

“I don’t know if I can pass the test….” wonders Ms. Sledge, as Mr. Cylar’s guitar cries on his shoulder.  About halfway through, it bursts into fortissimo still slow paced, and measured; helped along by the excellent, tight rhythm section. It staggers disconsolately, quite possibly with a half empty bottle, along a dusty road, or perhaps beside a railway track, as it laments its fate.

“Nothing Lasts Forever” is back in upbeat territory, funky and stomping. Great fun;  and the set is nicely rounded off by “Can’t Come Down”
If any of these songs had been played at Woodstock they would now be legendary. DJ’s would speak of 68 – 75 in hushed tones as they marveled that the band were still alive, or lamented that they had died, aged 27.

As it is, you only know about them because you know them, or your friend knows them, or you heard them on a small radio station that loves music more than money, or perhaps, you read about them here for the first time.

Whichever it is, please remember, if you like an unsigned band, scream it from the highest rooftops, and spread the word.