With thanks to my son for the recommendation

It was my son Morton, who has been listening to The Reasoning a lot on Spotify, that told me about this band. I don’t really use Spotify much although I have it on the PC. It doesn’t really pay the bands enough money in my opinion. Don’t get me wrong, I’m not saying they are a con. A fraction of a penny is better than nothing for someone streaming your song, but I prefer to buy music from Bandcamp, if I can afford to.

Also my PC is so slow that streamed music tends to buffer if I try to open another web page, so having the MP3 or a CD is better for that. And then I can stick it on other players when I’m on the move. However, I digress.

So about that tag line, I published a post earlier today asking just exactly why they chose that. I also asked about where they are from, which turned out to be more complicated than I had expected. A quick link to the band’s Facebook page and I got an answer almost straight away. Here’s what Simon Godfrey (vocals, guitars, drums)had to say,

Hi there Oliver. Thanks for getting in contact and I hope all is well with you.
In answer to your questions, the phrase “The World’s Smallest Prog Band” initially came about simply as a tongue in cheek slogan.
We kept saying it to one another, as we were just doing the music because we loved what we wrote, and hanging out as mates.
We never in a million years thought the band would be as successful as it has become. We kept the slogan because it reminds us that, above everything, the music should come first.
We’re just the arseholes who play it, nothing more.
As to where we are from; we’re all originally from West London in the UK. Today however, we are spread about more liberally.
Jim Sanders, guitar and vocals, lives in Sweden; I spend my time both working and living in London and Philadelphia in the USA; bass player, Paul Worwood,  resides in deepest, darkest Surrey; drummer and all round living chaos machine, Leon Camfield, lives in Bedfordshire, while lyricist and spoken word main man, Robert Ramsay, dwells in Reading.
I hope that helps sir but let me know if you need any more information. Cheers.

Which is a full and complete answer if ever I saw one. 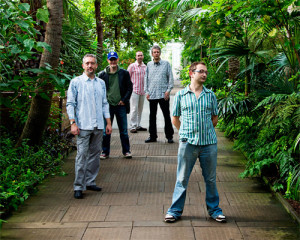 So what about the band? They are a five piece, which was at one time a four piece (Leon Camfield being the fifth member) and they jokingly forget that at various times. Unusually they have no keyboard in the line up, which they explain by saying that they wanted to avoid prog clichés.

They formed in 2004, and the reason I said in the title that I am “a bit late” is because last year 2012 they quit live performance due to Simon Godrey suffering tinitus. Classic Rock mag article

I am also too late in another sense, in that the band who started out and ground zero, have enjoyed a fair degree of success (at least by Prog rock standards in recent years) and, whilst by no means being a mainstream act, have been signed to a substantial independent label for some time now.

As a relatively established act, there is no Bandcamp profile, but they do have CD Baby, and are therefore easily found on Amazon, iTunes and of course Spotify. Likewise you are not likely to hear them on unsigned only radio since these stations don’t pay royalties for obvious reasons.

In fact the band are even big enough to have their own Wikipedia entry and they didn’t have to write it themselves! That’s when you know you’ve arrived. Ha ha ha!
Here’s the discography, save me doing all the hard work.

With four albums to work through, and let’s not forget this is four albums of prog, it is too much for me to try and review the music in any depth right now. My early impression is that I am going to enjoy getting to know Tinyfish, there are some strong similarities to The Reasoning, one of my favourite bands, and I will probably have reason to write about them again, since they continue to write and record music.