Well here’s a funny thing; there I was, doing my “work experience” bit at The Voice of North Devon radio station on Saturday (taking over the last hour of Mark Barnes ‘ show) when I met someone I have admired for some time now.

Colin Slatter does the show from 11.00 – 3.00 on a Saturday after Mark Barnes, and this week he mentioned that he was interviewing someone who was playing at the Pilton Green Man Festival.
A couple of minutes after I vacated the hot seat (having got the news absolutely bang on) the door flasher went. (We have a flashing light in the studio for obvious reasons) 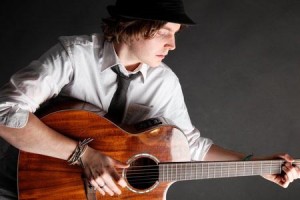 Funke and the Two Tone Baby from his Myspace profile

I went down to let the guest in and showed him up to the studio where we started chatting. He introduced himself as Daniel Turnbull, and we found out that he was from Kent, so I immediately asked where exactly in Kent because, of course, I know lots of musicians from that area.

He told me Rochester, and  then explained that he appears under the name Funke and the Two Tone Baby, at which point I reacted rather as though Robert Plant had just walked into the room.

I’ve known of Funke’s music for a while now, via that old stalwart Federal Radio; in fact I had already started to think about telling him about Federal Radio when I discovered who he was.

Funke and the Two Tone Baby, despite the long stage name, is just this one young man who plays guitar, harmonica, and stomp box; and sings, as well as using a loop machine, to achieve an incredible sound entirely on his own.

Colin did a brief interview and played a track from Funke’s new album “Battles” before Daniel dashed off to get set up for his set at the Pilton Green Man Festival.
Battles, is his second album and is available to buy as a hard copy CD with immediate download from Bandcamp.

Unfortunately I had other commitments for the afternoon and couldn’t get along to watch the set, which is annoying as he probably won’t be back for a good long while, since he has to travel about 300 miles to get here. As you can see from the picture however, my presence would not have made much difference to the huge crowd that turned out to watch him play. 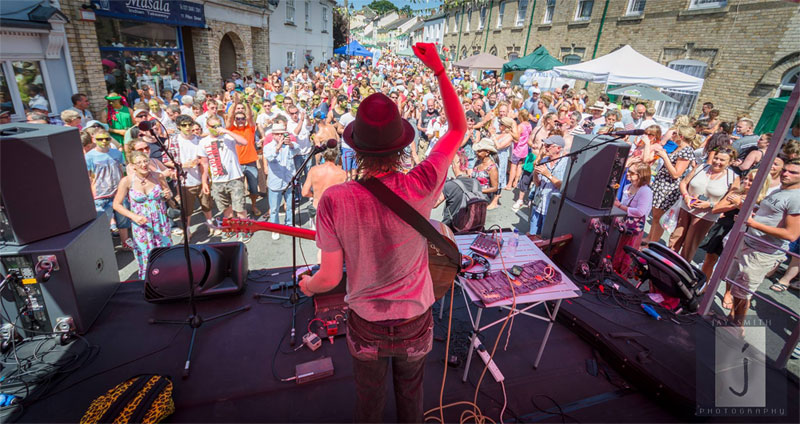 Picture by Jay Smith; taken from the Funke facebook page.
I searched for a website for Jay Smith but couldn’t find one.
If anyone knows it, I would love to include a link to it here.

You can find Funke and the Two Tone Baby in numerous places online. Here are some of the most important (in my opinion)

Oh alright, in case there are any “twits” reading this, here’s the Twitter link