I must explain something which regular readers will no doubt have worked out.
Most of the time I am not so much introducing YOU to a band, but introducing myself.

I hear a band on the radio, or someone introduces them to me, and I think, “ooh I like this, I’ll do an article about them”
So then I start checking them out in depth, finding all their websites, and listening to any audio or video I can find online.

So while I write about the band I am often listening to their music as I do so, and letting it wash over me. 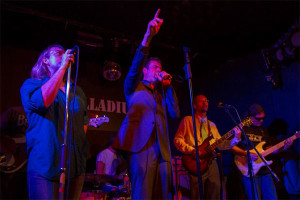 Some of the North Devon Muzo Collective, performing Beatles songs at The Palladium Bideford.
From left to right : Me (Badly Worn Toy) – Phil Saunders (Captal) – John James (Anti Plastic Explosives) – James Sussex (superb guitarist, not even in a band)
Photo by Derek Parnell

The main singer there was one Phil Saunders who is the lead singer of Captal. The remaining members are Mike Cook, Keith Norburn, Steve Conway; although their various sites are not forthcoming about what each member’s role is in the band. An oversight which I feel needs correction for the sake of journos who don’t like to have to do any work if they can avoid it.

I am sufficiently interested (or is it sad?) that I spent a while putting together clues and have worked out that the line up is Phil – vocals + guitar, Steve – bass, Mike – guitar, Keith – drums. If I got that wrong you’ve only yourselves to blame lads.

Captal’s official website is smart looking but very brief. In a single page, however, it does manage to convey everything most visitors will need to know. A brief introduction to the band includes links to Facebook, etc. There is an audio player, and forthcoming gig listings, courtesy of Reverbnation where they are ranked the number one Alternative band in the region.
There is a video embedded from their Youtube channel where there are more videos for your perusal.

Such as this one recorded at the Bull and Gate, Kentish Town, last year. (Nov. 2012)

Clearly this is a band that has its online presence well integrated, although this has not resulted in top google ranking for a search for “captal” so maybe some better keywords more back-linking, or perhaps a listing in DMOZ

Musically they are everything you would expect from an alternative band. Heavy riffs and compact melodies, hard hitting drums with some light touches now and again, and vocals that are passionate and powerful yet tuneful, certainly not just shouting. Think Killers, Strokes, Presidents Of The U.S.A. that kinda thing.

After the Beatles gig I did a radio show at The Voice and happened to find some tracks by Captal in the database.
So I played one called “Friend” which was great and got some good responses.

Captal have a new album coming out shortly so it will be interesting to see what comes of that. I will no doubt be playing a track or two on my radio show at The Voice FM.