Album review – New Messiahs – Postcards From The Back Of Beyond

Postcards From The Back Of Beyond
by: New Messiahs

Regular readers will already know about New Messiahs because I have already introduced them and reviewed four tracks that they had previously released as an e.p.

Here’s “Take The Long Way Home” (sample) from the album.

Now, however, they have finished the remaining six tracks of their debut album, “Postcards From The Back Of Beyond“. It has been a long wait for those, like myself who instantly fell in love with the lush melodic rock that New Messiahs have crafted. They don’t limit themselves to drums, bass, guitar, and vocals, but incorporate brass, keyboards, and whatever else they feel is needed, resulting in a much more dynamic album. 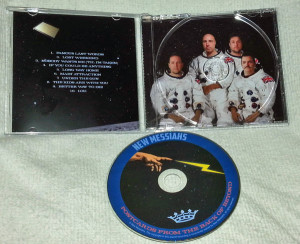 My only gripe has nothing to do with the music, and is not even the bands’ fault. The CD pressing company didn’t bother to put on any ID3 tags; so all the tracks are credited to “Unknown artist” “Unknown album” and just listed as “Track 1” to “Track 10”
This was also a problem with the last album I reviewed by Malf and he assures me that he had PAID for the tags to be added, so presumably these companies just think unsigned bands are not worth taking good care of?

Other than that, this is a very professionally put together album with nice artwork, and some impressive production and recording credits.

So, back to the point. It was a long wait for this album as the band kept finding things they wanted to do better.

I am familiar with this problem myself. I was involved in recording a 7 track CD, and after listening to it over and over again, I started to notice a moment when I was singing flat. I knew there were other takes that were not flat and I spent an extra hundred quid getting them to remove the offending slip, and slide in a better one. Even now I can hear other bits on the tracks that I felt we could have done better, so I can totally sympathise with the lads for taking their time over it.

Well it was worth the wait.  Everything sounds just great, even on my crappy system, and you just know it is going to sound awesome on the reference headphones in the studio when I play a track on The Voice this weekend.

I’m not going to do a blow by blow account of each track. Every one is a humdinger with elements of Paul McCartney about it, very musical, melodic, and vibrant. Great musicianship throughout. One track vaguely reminded me of Buddy Holly by Weezer.

So let’s just say that this is going to be an album that I listen to on a regular basis and will play to friends any time I can get them to listen. It will certainly get added to the tracks that my band plays before and after our set when we play gigs.