a blend of Irish folk and progressive rock

I was just about to write an article about a band called the Moulettes and I wanted to reference Mozart’s Revolver.
As I began, I realised I haven’t told you about the Washington state prog folkers yet, so I have to do that first, really, before I can do the other. 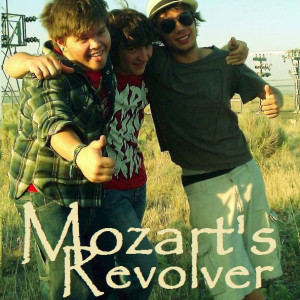 I first discovered this extraordinary band quite by chance in the chat box of Kate Lynn-Deverre’s Sunshine Cast that goes out on Gashouse Radio in Philadelphia.

Somebody in the chat box was saying that there was this band called “Mozart’s Revolver” who were very good.
Immediately I was curious because it is such a brilliant name. So I asked what they were like, and was told they were a crossover between folk and prog.

Mozart’s revolver is a brilliant name, not just because it conjures up the amazing musical talent of classical music’s most famous wunderkind – whilst hinting at a darker side to this outfit that you would not associate with Ludwig Amadeus, but also because it is a very easy term to Google.

Straight away, while still listening to the radio show and engaging in the chat box, I found their official website – and as soon as there was a song that didn’t appeal to me, I played the track that was on the home page. (Actually it plays on opening so beware)

The song, Síocháin (pronounced “Shi-hoyn” which means “peace”) is an amazing piece, particularly when you know it is only a demo. It opens with a very folky feel and soon turns into something of an Irish jig, but the vocals are fierce and intense putting fire into the belly of the music like a large shot of uisce beatha. (look it up, I had to) 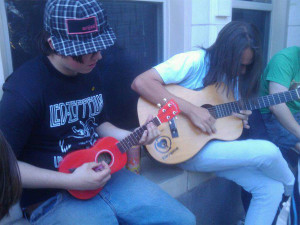 The violin takes on a charmed life and matches the vocals; now hissing like a dragon’s breath, now pizzicato while the devil tap-dances. Meanwhile the drummer is unstoppable, achieving a  bodhran style from what I must assume is a conventional drum it. It has some good stops and lighter moments, justifying the prog tag, although at only 4.15 it is a little on the short side.

I guess I knew I would like this band the moment I saw one of their number holding a ukulele and wearing a led Zeppelin tee-shirt.

Facebook page is HERE with a couple of tracks on there.

There are also some videos at their Youtube profile

As far as I can ascertain there are no recordings to buy as yet. If you are lucky enough to live in the area where they play live then you should see them.