Devon folk/rock with an American accent 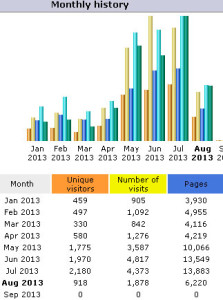 2013 stats for this site to 12th August – projected 2,400 unique users for August – Increase in users every month for sixth months.

So, I’ve been doing this blog for a while now and attracting pretty impressive numbers of people to the site.

Well over two thousand people will have read something here during August and it has been going up every month for six months.

Despite that I know I am only scratching the surface of the tip of the iceberg in terms of reaching out to independent artists, and music fans worldwide; and a clue to that fact is that I just discovered a really damned fine band on my doorstep.

In fact I have discovered a lot more local bands in the last week and will probably find loads more in coming months because I am now doing this regular radio show on The Voice; and with the new FM transmitter 106.1 and 107.8 coming on stream in October the show’s reach will double or more meaning even more people hear the great music I want to introduce them to. 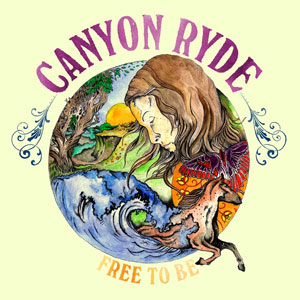 Sleeve art for “Free to Be”

The lead singer of Canyon Ryde, Phil Lively Masters, responded to an open cal for local bands to interview on the radio, and of course I checked them out straight away.

You have to wonder sometimes how a band as good as this, with a stack of great original  songs already recorded, and based in the same town as me, could have kept under my radar all this time.

It just goes to prove how immensely difficult it is to get known if you don’t have the backing of a major label.

Their debut album “Free To Be” is their current offering and can be heard on Soundcloud in its entirety.

The first thing that springs to mind for me is The Eagles or early Jackson Browne when listening to these tracks.

The band themselves suggest The Jayhawks, The Black Crowes, Jason Isbell, The Beach Boys, Silver Jews, The Sadies, Steve Young, Waylon Jennings, Willie Nelson, Nick Drake, Lift To Experience, Billy Joe Sahver, and Beachwood Sparks; although I am forced to take their word for a lot of those.

My favourite track so far has to be “Beyond Lies The Open Sea” although it is probably not the most obvious one for most people.

This is defined as “psychedelic folk rock” where most of the other tracks are described as “country rock”.
It starts slowly with whispered vocals, brushes caressing the drum kit, and just the gentlest twanging of the guitars. This very slow build up is brave as most listeners will get bored on first hearing and it is obviously not a “single” the song doesn’t really build significantly until the very end, but as such I can see this being a real grower. It is something to put on late at night when the party is quietening down, or maybe watching the sun set with a glass of wine on a warm summer evening.
At around six minutes it starts to build and the most wonderful hammond kicks in playing out to the end at a highly respectable eight and a half minutes.

You can also find them on Reverbnation here

I look forward with eager anticipation to interviewing Phil on the show in the next few weeks.