Kingdon Posted in Uncategorized — No Comments ↓

If you are under a certain age then this may take a bit of explaining.

7th Sept (yesterday) was Cassette Store Day, an event which passed with considerably less interest than Record Store Day did a few months back. 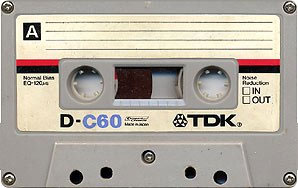 C60 cassette – 30 mins of recording per side.
(photo wikipedia commons)

The compact music cassette was invented in 1964 and was initially used mainly for speech dictation and such like. However the music industry also used them for easy recording of demos for new songs and such like.

Better quality cassettes became available in the 70s and by the late 80s the cassette had reached its peak of popularity as Compact Discs came in.

For people of my generation the “mix tape” was the most common method of sharing your music with friends. The record industry didn’t like it, claiming that “Home taping is killing music” but it is quite possible that it also helped bands, especially less well known ones, by introducing people to music that they might not have heard. 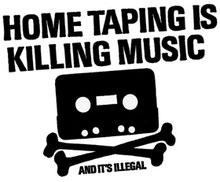 Thirty years ago, you simply couldn’t just send an MP3 to a friend via email, or post a link to a Youtube video on Facebook and tell people to check it out. NONE of these things existed. (certainly not for ordinary people anyway)

(apparently there was even a C180 but it was unreliable. Even the 120 tapes were temperamental and most people avoided them. You could get two whole albums on a C90 and that was ideal) 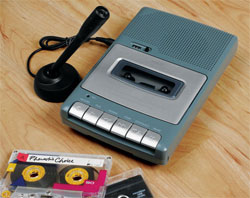 Back when I first started recording my favourite records onto cassette we didn’t have anything so sophisticated as a direct input. You had to place a microphone in front of the record player speakers and then keep absolutely quiet while the track recorded. It was terrible when you wanted to cough, or sneeze.  Sometimes your mum would shout up the stairs and ruin everything.

You would hover your finger over the “pause” button and try to cut it off at exactly the right point when the record ended. Then change the record and start again. Also you had to try and get the total length of the songs you were recording just right, to avoid having to wind on for too long at the end of the tape.

Nowadays media players tell you the length of each song in minutes and seconds, and you can assemble any length of music with ease and that is the objective of this exercise.

Rules of the game

When I say rules, think of them more as guidelines

I am probably being optimistic that people will post comments with their suggestions but that is what I would like. From your suggestions I might find new things to write about here.

I did this on Facebook first and got some suggestions from friends which have already given me some ideas. 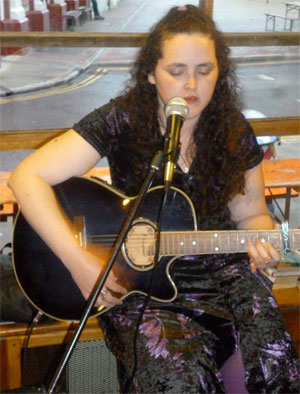 KIRI JONES is a prodigious  singer songwriter of considerable talent.
She posted a list which she openly admits probably doesn’t fill the allotted time.  She’s right; it is nowhere near 46 minutes. I’d say it is just about side one.

J’Adore “The French Song”, and I always have. Bubbleband’s one is toe tapping and great fun although I don’t know if I would want to play it too many times. I love everything by Suzanne Vega. Bear McCreary was an unexpected pleasure. Sadly I just couldn’t get on with Sundae Club when I bought their album “Technostalgia” and I wasn’t overly impressed with Don’t Drink The Flavor Aid. Not that it is bad, just a bit too experimental for my conservative tastes.

Kiri didn’t even include one of her own songs. She should have. She has a lovely voice and while she knows I know about her, no artist should miss a golden opportunity to push their own music forward.

JOHN WOOD is the manager of Exeter acoustic folk act Sound Of The Sirens.
He sent me a list which he worked out meticulously with the aid of a spreadsheet so he could add the times up in minutes and seconds. A sterling effort.

He adds “That was fun. I’d forgotten how much fun/frustrating cassette tapes were.”

Side 1 – There are some great choices there. Alice Cooper and Alex Harvey are a refreshing surprise. Sound of the Sirens and Troy Faid offer welcome familiarity to me, but a new treat for many. I don’t mind AC/DC but I don’t get as excited about them as some people I know.

Side 2 – Joe Satriani for a blast of rock to blow away the cobwebs, and then, wasn’t I saying in a recent post about The Relics that I think Bob Dylan was a genius and also that he most certainly could sing despite what some misguided journalists might claim? (yes I was) Talking Heads are never a bad choice. I bet a lot of readers won’t have even heard of them. Stop Making Sense was groundbreaking. Lastly, Sundae Club “Angels in the Sky” first track on their album Technostalgia.