One of Kent’s finest bands,
Spyplane’s new release is
“All That You Require”

Oh get me… I bet nobody else thought of wording it like that. The title of the album is “All That You Require” so I made it look like I was saying all you require is the new e.p. by Spyplane. ….. Oh please yourself.

I wrote about Spyplane a little while back and since then I have got a bit more of a hang of writing blog articles. I also know a whole heap more about the band.

The new recording is available on Bandcamp which I have said many times is the best platform I have found for independent bands to sell their music.

It is only five tracks, and my pedantic mind wants to call it an e.p. but I suppose, really, in this digital age the definition of an album has changed and it is nothing to do with the length. 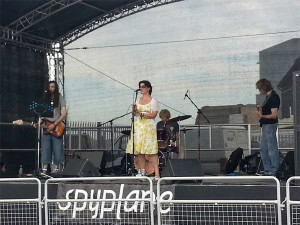 I described them last time as acoustic but at the time I think they were just changing their line up from a normally two piece act, to a full four piece band.

Sherrie’s voice is quite unique and wonderful, she has this indescribable quality that send shivers up my spine. The voice of a space siren, rendered in five dimensions and compressed to a mere three for my feeble earthbound ears. If I ever heard it in full five D my brain would probably melt and dribble out of my ears.

Now having waxed lyrical about Sherrie, I can’t exactly ignore drummer Ashley Smith who keeps everything tight and together in the background. His playing is fluid and not stilted or repetitive. I am pretty sure you could take all the other tracks out of the mix and the drums would still be interesting to listen to. 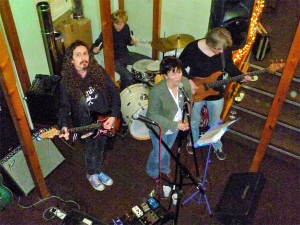 Speaking of taking all the other tracks away, the bass is provided by Alec Tappenden who is of course a fine exponent of music played exclusively on the bass guitar. Six string for preference. But as part of the band he integrates superbly, augmenting Ashley and underpinning Joe, he really makes the bass work and doesn’t let guitarist Joe Inkpen do all the hard work or indeed take all the glory.
For me, the very best bands are not all about one person but are in fact a team of equally  talented musicians working together to a  common goal.
Led Zeppelin had that, and in a completely different musical niche, so do Spyplane.

So of course I come to Joe Inkpen, who’s talent bestrides the Kent music scene like a colossus. It is hard to imagine any guitarist having as much influence and importance as Joe who was not already a superstar. He has been involved in half a dozen of my favourite bands at one time or another, he writes fabulous music, and stretches the boundaries of music, in his generation, in much the same way as Pink Floyd did in theirs. Somebody really should give him a huge pile of money and a state of the art recording studio, and just let him get on with it.

The arrangements on these five tracks are wonderfully lush. Everything is tight and the overall effect is as professional as you could ever hope for.
It is offered on Bandcamp as a “name your price” deal.

If you like it and decide to download a copy, I urge you to make sure you pay something. You owe it to yourself (and everybody else) to put something towards the next album recording costs.