A superb band for all occasions

I very nearly became the lead singer of this band a while back, but for one reason or another, I didn’t.

If I had, I would certainly have been kept busy; as busy as I have ever been in any band, as it happens. They don’t even have a website, just a Facebook page and a profile on Lemonrock. On there, at the time of writing, they have 32 upcoming gigs across Devon and into Somerset. 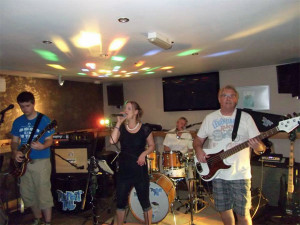 The band is guided by seasoned bass player Phillip Perry, ably assisted by Angie, their vibrant lead vocalist, Dave on lead guitar, and Leon, on drums. Their 38 song set list (constantly changing) reads like a playlist for the best radio station ever, and they have plenty of accolades from venues, who also book them back again and again for gigs. 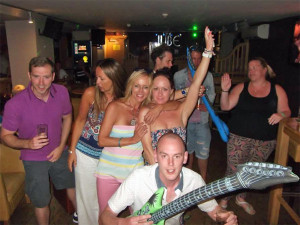 I went to see them when they played a gig in Littleham at the Crealock Arms. The venue was packed when I arrived during their first set, and loads of people were up dancing from the start. They didn’t let up the pace with very short breaks between songs, just enough time for the singer to announce the song and gee the audience on even more.

Every song was played to a high standard, walking the narrow line between trying too hard to copy –  and straying too far from the essence of the original.

As well as playing pubs this band is well set up for playing weddings and birthdays which is a great market for musicians who need to get paid.

Not having a website has not hindered them at all in getting a string of regular gigs, but of course, covers bands generally have an easier time of getting gigs especially paid gigs than originals. Also with no original material to promote there is little point in worrying about having a Youtube account beyond the ability to showcase their own live recordings.

For bands like this, Lemonrock is probably one of the most important tools they can have so I am going to write an article about them next.