The result of this will be a huge leap in audience figures as most drivers in the region will be able to tune in, as well as the many people who have not got DAB at home yet. The coverage of the three new FM transmitters will be far better than the single DAB transmitter at Huntshaw Cross as well, meaning that those who live in the shadow of a hill will almost certainly now have a strong signal.

Unsigned bands at The Voice

The Voice has long been a strong supporter of local unsigned bands and artists and this has been most obvious with the “Street Live” show which encourages local musicians to come into the studio and record a live session. 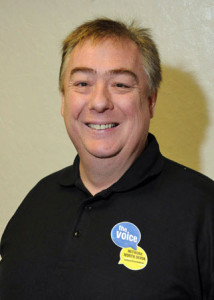 It is really live as well, going out on air as it is recorded, and then being added to the database for posterity. Roy Grimes hosts the show and has had a string of superb acts come through the doors since the start.

At the moment we are only able to record acoustic sets, but there are plans afoot to set up fully live gigs at a major local venue where we will also be able to record and broadcast full bands.

Street Live interviews and performances are also made into podcasts like this one.

You don’t have to be from North Devon and Torridge to get on the show, although it helps. We are also interested in recording sessions with bands from around the country or even the world, if they are touring in the area and want to come into the studio.

Every session recorded is added to the database and can be played out on any show at any time.

As well as Street Live, my show is also interested in unsigned bands. I currently do a show on Sunday afternoons and am keen to interview any bands that want to come into the studio. I always play a few unsigned tracks on my show usually selected from bands that I write about on this blog or from the Street Live Sessions.

You can contact Roy Grimes directly via email to set up a live session for yourself or your band.