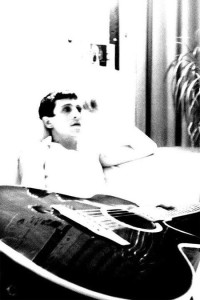 I just happened to spot a post from him on Facebook saying how the analytics on Soundcloud showed he had more fans in America than the UK. Probably the fact that he is  signed to Miami based label Sheeva Records would go a long way to explaining this.

Anyway, I clicked the link to the Soundcloud page and checked out some tunes and then went over and liked the official band page on facebook

A nice touch was that he promptly sent me a message saying “Hi mate, thank you for supporting my new artist page, I really appreciate it.” I like the personal touch and it is well worth making an effort to thank every new like you get on your page, at least when you only have a few hundred.

Check out debut single “Veins” which came out in October 2012 Follow up singles “Chasing Clouds” and “Deliverance” are also available to stream on Soundcloud, as well as the most recent offering “Shine For You” which was released earlier this month. A full album entitled “Before The Clouds Come” is in the pipeline.

Daniel’s music has already enjoyed worldwide radio airplay, been included on compilation albums and soundtracks, and has been the subject of various “club remixes”.

He is local to me, and to The Voice where I do a radio show, so it goes without saying that I will be playing him on the show. I also hope to get him to come in and do a live session for Roy Grimes on his “Street Live” show.

He is also good friends with the guys in Digital Natives and was at the same gig as me last Saturday at the Chill Bar.
And he is in touch with Kiera Osment another local talent who has already featured on The Voice, and indeed this blog.

Anyway, I will leave you with this video from what I must assume is his official Youtube channel.