Another band that responded to my request, on Facebook, for more Devon bands was Sunday Skyclub. Band member George, sent me a message via email with a couple of links, and added, “having just been nominated as best breakthrough act at the south west music awards we would love some help to get some air play.”

You can get a free download of their three track e.p. “I Like Songs” from their Bandcamp site. But for now, here it is so you can “try before you don’t buy”

It’s very light and airy, this music; like Aero flavoured soft scoop ice cream. They list a strange and diverse set of influences, “Jimmy Eat World, Taylor Swift, Owl City, and Michael Jackson” I can hear the Owl City although this band doesn’t feel the need to enhance their vocals with gross and pointless distortions. The lead vocal sounds as though there is a bit of a Liverpool twang to it, but that could be my imagination. (I’m sure there isn’t a “Scouse effect” pedal available anywhere. Could be useful for Beatles tribute bands if there was.) 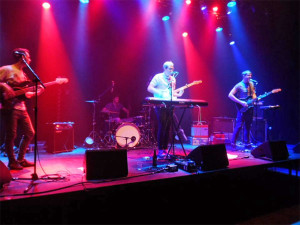 Track 3 “All About You” seems to have been mastered significantly louder than the other two. Track 2 “Victory Road” seems to be the quietest of the three. Bands need to take great care on little details like that, especially because radio stations want recordings to be “right” for airplay. It can be annoying for anyone who uses playlists and wants each song to play out at about the same volume.

The e.p. is called “I Like Songs” and it is quite evident from listening to this band that they are telling the truth. These are not big productions with effects and distortion, just simple vocals and instrumentation. Strip it bare and you still have good songs at the root of it.

I also like the fact that I have been able to download the tracks free, so I don’t have to wait for the band to send me them to play on the show. Not that I object strongly to paying for them. In fact I often buy music that I could get for free because unsigned bands need and deserve to get paid, but recently I have reviewed a lot of bands that don’t even have a way to buy downloads of their tracks and that is a bit annoying.

As well as the Bandcamp site there is a Facebook page and they are on Reverbnation but I don’t like that site so I try not to link to it.
It is possible to make Bandcamp your official website but they haven’t done so and I strongly feel that a band needs it’s own website, not relying on Facebook etc.

If not a dedicated website then Bandcamp or Lemonrock can be good enough.