Another fruitful evening listening to XRP radio introduced me to three interesting rock bands. In the last week or so I have been mostly writing about singer songwriters and art rock. So I feel I am long overdue for spending time listening to something with a bit of energy and bite.

Here’s a sample of their stuff for you to listen to while I witter on. 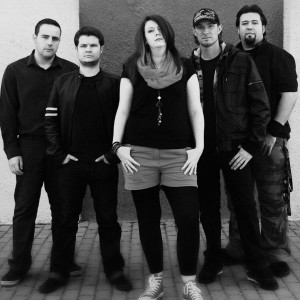 They were formed in 2010 as a three piece, and used backing tracks for electronic drum sounds but soon added a drummer and guitarist in order to get a better “live” feel.
I see nothing wrong in using back tracks for certain things, but I applaud anyone making the effort to do without them if possible.

There are two offerings on their Bandcamp page their debut eponymous album, released 31 January 2013 – ten tracks totaling around 50 minutes;
and the follow up e.p. “Neon Klaatu!” five tracks, 20 minutes; both are available for a “name your own price” download. As always I implore you to make a payment, even if it is only a pound. Better still, the album is also available as a hard CD with funky eighties retro circuit board designs all over the packaging.

Their Youtube Channel has 15 videos. This is the most recent one.

I really do like the way they have merged genres that would not normally sit side by side. I would say they are more metal than anything else but that is by no means all they are, and the twists come dotted throughout the music.

I definitely like the fact that the vocals are sung, rather than shouted or roared. I know some people like that sort of thing; but to me, it is insane to have fantastic guitar, keyboard, drums, and bass, and then have the singer spoil it all by shouting incoherently at the mic. Laura’s voice is loud and clear, very much in tune, and has a lovely tone for the music.

They ought to become very popular in America as well, where good rock music is widely appreciated.