Fourth heavy rock band in a row for this blog
The Howling – with some influential friends.

So just after I have finished my third article about a hard rock band, which was, I admit, a relief after writing a string of articles about art rock bands and singer/songwriters, I get a message on Facebook from a lovely lady by the name of Jenny, telling me about a band called “The Howling” who are from London, but their bassist is, I am reliably informed, from North Devon.

Not that this blog is supposed to Devon biased but my radio show does have to be, a bit. Well anyway, I cannot ignore a recommendation from Jenny, so I checked them out and I find that she is not the only one singing their praises.

No less a musical authority than Noel Fielding has said,
“The vocals are unbelievable … like a pre-pubescent Jim Morrison”
Don’t believe me? Check out their official website featuring a trailer with the aforementioned Mr. Fielding right there in the thick of it. The website, though stylish, doesn’t have much other substance. The tour guide takes you to their Facebook page, and the audio samples are embedded from Soundcloud.

Here’s “Rock N Rolla” to give you some idea of what they are like.

The band describe themselves as “dragging punk in to the next generation” which makes a sort of sense, although I think they have some classic rock leanings, as well. Certainly this is not the raw “can’t-play-won’t-play” of the early punk pioneers. True, all the tracks are two or three minutes long but there is some classy guitar playing here; harmonies, and vocal weaving.  There is also the injection of the odd bit of electronica, it’s not overbearing, in fact even less pronounced than “Giskard” that I reviewed the other day. 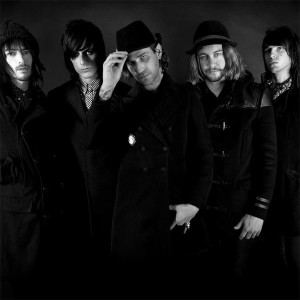 The Howling are a five piece consisting of

I’m afraid I don’t know which one is which in the photo.
Despite appearances, Noel Fielding isn’t actually part of the band.

They have a good selection of videos on their Youtube channel including this very enjoyable acoustic offering entitled Lunatic.

My first impression when starting to check out this band, was that they must be signed. They look so classy, and with the backing of famous people; not just Noel Fielding, but also Xfm presenter Sunta Templeton, and SikTH guitarist, Dan Weller, (not forgetting my friend Jenny) you could be forgiven for thinking that they are already at the front of the queue for “next big thing”.

Yet nothing is guaranteed and, even at the top of their game, few heavy rock bands are permitted (or even WANT) to mingle in the top forty singles chart.
As has been the aim of this blog since its inception; ever since, we adopted the “Deferred Sucess” song “Make A Living” as our unofficial theme song.  I hope that they can at least make enough money to carry on doing what they so clearly love; and if they ever have a platinum selling album, they are welcome to chuck a couple of free tickets in the direction of this blogger.