Now, I know what you’re thinking; “synth pop?”
YEP. Keep reading, and give it a chance.

OK, let’s give you something to listen to. This is the track which got them through to the top ten of my GUBIC competition. (see below) 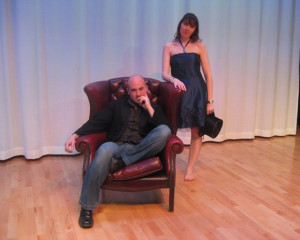 Now back in the late eighties, you may have ended up getting sick of synth pop duos.
Maybe not, or maybe you are too young to remember.
Either way, Yazoo, Erasure, and others of that genre are heavily invoked by this surprisingly fresh duo consisting of Glynn Jaine, from Huddersfield, and Bridget Gray, from Aberdeen. Yes, Aberdeen! They often collaborate via the internet.

The pair are emphatically fans of Erasure, even to the point of being signed to “Lexer Music“ which is Erasure’s own online record shop, specialising in synth music. Lexer also sells music and merch for Yazoo, Depeche Mode, Pet Shop Boys, and Ultravox, as well as a smattering of other independent artists like Destination. 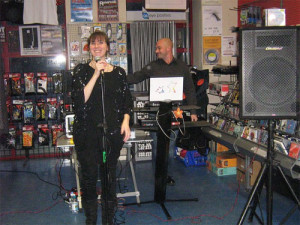 Destination performing live in “One Up Records” in Aberdeen.
(Now sadly closed down)

Glynn is the “Vince Clarke” of this outfit, creating all the synth sounds live as well as in the studio. He does so with enormous skill and creativity, but nevertheless, it is Bridget’s voice that makes this a little bit special (for me at least).

Now, I hate to say this, knowing that the band may well read it, but I never liked Erasure. I frankly couldn’t stand Andy Bell’s voice.
Sorry, but I’m not going to lie.
Bridget, on the other hand, has a lovely voice, angelic, floating, sprinkled with stardust and magic.

Back in 2010 (as I so often remind readers) I started up a group on Facebook with the intention of  forcing an unsigned band into the charts through group actions. I asked bands to send a song in which I then streamed for people to vote on. Eventually we narrowed well over a hundred songs down to just ten, and the group, which had now grown to nearly ten thousand people, was asked to vote for the winner. 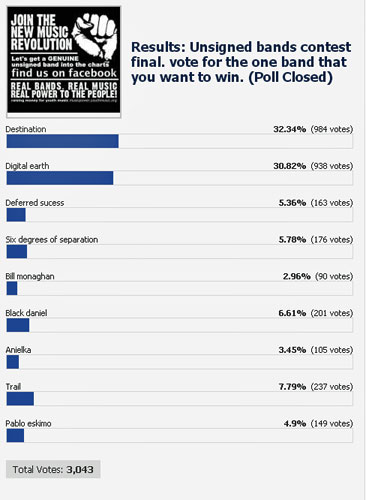 Screen shot of the final voting result after a week of voting.
Just over three thousand votes were cast.
If everybody who voted had bought both singles they would have made the top forty that week.

I always assumed that the winner would be a rock band, because nearly all my friends were rockers. Yet, in the last week, two bands emerged as the clear leaders. Digital Earth, and Destination. Neither was in any way “rock”.

It all got very exciting, as bands encouraged their fans to vote, and explored a range of PR avenues. Digital Earth even managed a TV appearance on Yorkshire’s local BBC programme. Local radio reported on the story, and there were articles in local and even national press. The tension got too much for the leading bands who were neck and neck on the evening of the last day of voting.

Eventually, after a string of emails back and forth I decided (with their agreement) to declare both bands equal winners and we tried to persuade people to buy both singles. Of course we failed to make a dent on the charts, but a lot of people did keep their promise and buy the singles, and Destination are still going strong today, with three excellent albums under their belt, available from Lexer Music.
Here’s a Youtube video of the song that they used in the last week of voting “If I Ruled The World”.

Their debut album was Alternate Realities

The latest album is from late last year