DO NOT PAY BLOGS FOR INTERVIEWS

Kingdon Posted in Media and PR, This blog, Top Tips — No Comments ↓

I am still utterly gobsmacked
to hear that a friend has been
offered an interview but they
have to PAY the blog for this. 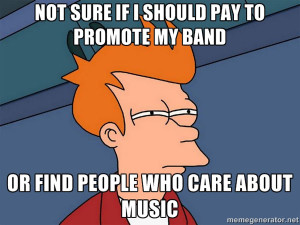 Now, let’s get one thing straight; of course there are times when you will have to pay people to do things for your band. But getting an article written about you in a blog ISN’T one of them.

Blogs like this one can and do make money from advertising. Not very much money unless it is a very successful blog, but nevertheless it is possible to make a living doing websites, in the same way as it is possible by writing and making music.

In other words we are all in this together, and when I say that, I don’t mean it the way our government does. I mean I am rowing and bailing for my life as well.

So it really pees me off when a friend of mine posts on Facebook that he has received an email from a music blog offering him the chance to be interviewed on their site for a payment of £X. The site have already conducted numerous interviews in the last few months and they have had thousands of page views  So what they are saying is “We’ve already made £X00 from gullible, desperate musicians, and we’d like to add you to the list.”

The interviews are done online. They do practically no work for what is basically a free article for their blog, AND they want you to pay for the privilege.

I am so angry I could spit. I would offer to pay 50p per interview if it wasn’t such an insulting amount of money.

Meanwhile there is already a blog that will do an interview with your band completely free of charge.  Go fill out the form here
Cafe of the Muse is a general arts blog, that has a pretty high level of traffic.