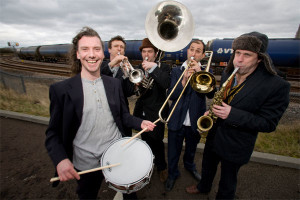 I heard The Baghdaddies on XRP radio‘s “tagged” show last night.
Thought they would be worth checking out.
They were.

By the way, I get a fair amount of new music via XRP radio, if you haven’t sent your songs to them for airplay then you should.

I’ll start by chucking in an embedded file from their Soundcloud page. There are three tracks here. “Sweet Girl“, “Dongle” and “Keep Ya Feet Still”

Nice to be able to find a proper website for this band, and it is a very well made site with all the information at your fingertips, and really easy navigation. On top of that it looks great and conveys the band image very effectively.
There are even professional things like technical rider and stage plan that venues need when booking the band. 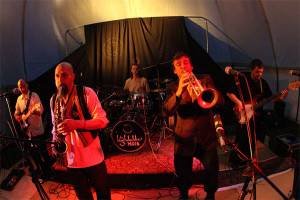 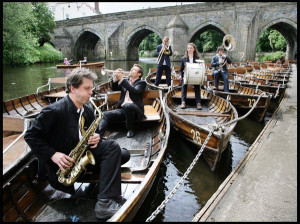 It is understandable that they have got their act together considering they have been around for nearly twenty years, have toured all over the world, and released five albums.

The sound is, well, easy to describe, and yet at the same time, very very hard.

Try to imagine a bunch of Geordies touring the world, spending time with Romany gypsies in the Balkans, and meeting  a contingent of Bedouin (fresh from rocking the Casbah)  Imagine that on their travels they also played at a Bar mitzvah, picked up Samba from Brazil, Ska and Soca, from the Caribbean, Jazz from New Orleans, and Rāga from India, then brought it all back and forged a coherent music sound from that, and you will have a vague idea. 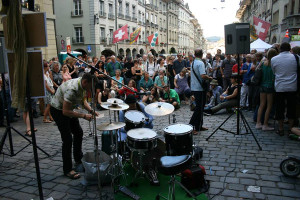 Looking at their website, with it’s extraordinary artwork,  and reading through the past gigs, and viewing some of the pictures, one almost expects to hear the words “… played in front of the crown princes of Europe… ” proclaimed loudly by a ringmaster wearing a red tail coat.

If you like Tankus The Henge, then this should be fairly up your street as well; and of course vice versa. Also check out Bison.

I said they have had five albums so I may as well list them for you.
Most are available via the band website.

This early release (on Gaz’s Rockin’ Records) features the original Baghdaddies line-up. It was recorded in Shepherds Bush, London on 02/01/1998. Produced by Gaz Mayall. Although sold out on the website it may be available on Amazon

Tracks 1-5 and 9 were recorded live at Glastonbury Festival 2000 and feature NANA OBSCURI on vocals, The other three tracks were recorded and mixed at studios in Newcastle.

Recorded at ClaraVale, Tynedale in Feb/March 2003. The CD was presented with the ‘North-East Creative Award for Music’ (2003) and has had extensive radio airplay.

This album was recorded during October 2005. Leading on from where RAOK left off, the album contains 11 tracks of varied and crazy music.