This is another band that came to me via a comment in this blog.
I delete hundreds of spam comments every week, with only a handful of genuine comments, so it is really important to me to check out every band that posts a comment here.

I have a policy of only talking about bands that I personally like. I don’t like slagging people off, and if I have to criticise a band it will be for not having a website, or something like that. If I don’t like a band, I might send them a private message telling them why I haven’t reviewed their music, and may even make helpful suggestions. (in other words, if you are in a band and you want a review, then comment below. You have nothing to lose)

Hi there!
I am the lead vocalist/drummer with Eject Pilot Eject. We are a three piece rock/pop band based in South Wales. We have a single due for release at the end of November – “If You’re Listening” and have just released our first album “Echoes Shadows and Ghosts”. It’s an exciting time for us, and it would be awesome if you could give us a listen and a review…. 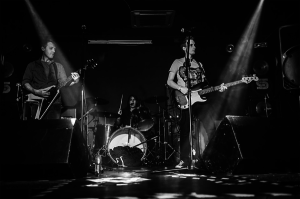 So there you go, article written, right?

Oh alright, I’ll make a bit more of an effort then.

First off here’s a track to check out.
Actually it’s the entire album “Echoes Shadows and Ghosts”
13 tracks for a measly five quid at Bandcamp, streamed here for your listening pleasure.

Eject Pilot Eject (according to their Facebook page) consist of

Eject Pilot Eject (EPE) are a catchy three piece rock pop band * from South Wales. Fronted by a female vocalist drummer the band set out on a journey not commonly taken. With an equal love for playing live and recording, the band have gained radio, press and audience praise and recognition. In 2013 they released their first full length album “Echoes Shadows And Ghosts“. Along with live favorites the album brings Eject Pilot Eject’s journey together to date. 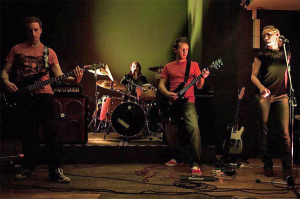 Four people on stage and I confess to being even more uncertain as to the exact line up.
Still a bit of intrigue just spices it all up.

Nicky Menage is given special thanks on their Bandcamp page along with Abi Harrison, Nic Palmer, Luke Rand, Christian Llewellyn, Angela Durrant.

I am going to guess (for now) that Nicky has joined the band but they haven’t updated the website. Either that or Nicky helped out in the studio only. But that could be completely wrong. I await illumination from Sarah. (Edit 8th Nov 2013 see Sarah’s comment below)

Generally I am loving the slightly bubblegum – post punk feel of this, little bit “Blondie”, little bit “Katrina and the Waves”, dare I say it “Strawberry Switchblade”? Bit harsh? Alright, “Pat Benatar” (I quite liked Strawberry Switchblade actually)
Similar unsigned bands? “Auction for the Promise Club”  and “Kitty and the Lost Boys“, always keep in mind, it isn’t exactly any of these but I am arbitrarily reminded of them as I listen. 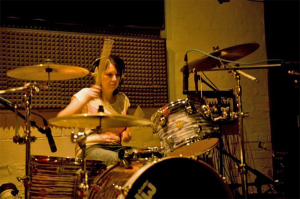 I also have a website about The Honeycombs, who had a girl drummer.
They suffered from being treated as a novelty act.

I haven’t even mentioned that this band has a girl drummer who also sings.
There, I’ve mentioned it. Now, get over it. This isn’t a novelty band, they sound great, and have some strong songs. And since they are from South Wales, they might even get to play a gig near me so I can go and see them live. I notice they are already known to First Step management, who book all the best bands in my town.

I’ll leave you with this video from their Youtube channel. It’s their track Face To Face, with various studio and live footage cut together. Works for me.