An article in the North Devon Journal caught my eye. (I won’t link to it because they have advertising videos that autostart on loading)

The article was about a young man (29) named Ryan Martin, who as well as making hundreds of Youtube videos, also has produced an album of unsigned artists every year for the last six years. It went on to explain that he was, at the time, looking for contributions to go on the album for this years offering. His official website is here

The album is now ready and goes public for free download on 31st October (Halloween) EDIT
Which is today so I can now share the link!
http://www.thatryanmartin.com/ThatRyanMartin/Home.html 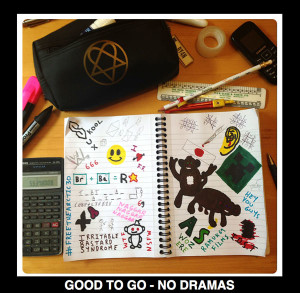 It contains an astonishing 26 tracks , and I am simply staggered by the quality of the whole thing.

The tracks range across almost every genre, including rap, metal, pop, folk, blues, and that music that just goes “wob-wob-wob-drrrrrrrrr” In fact there is a track by an artist named “Wob Wob Wob” which, oddly enough, is quite chilled out and trance like. The same artist also contributed a track under the name Zoido which is a different genre.

Another artist with two contributions under two names is Paul Gates, one as a solo performer, and the other as the band “Us”, and Jax also has two tracks on the album, one of which is a sublime cover of Guns and Roses “Sweet Child O’ Mine”

The album is titled “Good To Go – No Dramas“ and the track listing is as follows
(For the benefit of me and my radio colleagues, tracks with unsuitable lyrics are marked with a *)

OK taking each track in turn, “Horror Flick” is rap with some interesting touches. Not my genre, but I’d say this is pretty good of its kind. Chuckie Steele is one of the few artists on the album who is not from North Devon. He has contributed the opening track to previous albums, having met Ryan at “FrightFest” He combines his love of hip-hop music with his love of horror movies, as explained in this interview.

Model Aeroplanes are from Dundee in Scotland, and have been described as “Indie-pop that connects the dots between Vampire Weekend and Bombay Bicycle Club” I am also told they have had a write up in The Sun, but I can’t find that. “Any Damn Kid” is their bouncy indie offering on track 2.

Track 3 is called “AST” and is by local band Eaten by Sharks. It does have a slightly “demo-y” quality about it, but not too much so, and it is clearly a good song. I don’t think they’ve been going long, so there is bags of potential still to be realised.

The Verbals are another similar sounding band to Eaten by Sharks, indie garage/punk rock, also from North Devon. They provide track 4 “Infidels”

Track 5 is “Joker” from the prodigious Kiera Osment. I have reviewed her before (see here) and her voice is quite stunning, especially when you find out she is still just a kid.

My contemporary Paul Gates, talented singer from Barnstaple, who has been a regular at open mics in Ilfracombe provides the next track. A solo offering “In Your World” with an eighties ballad feel. Somewhat akin to Mike and the Mechanics for example.

Track 7 is by the artist known as “Wob Wob Wob” this is in fact the “more chilled mellow” alter ego of Zoido who appears later on the album.  The track, called “Nightskate“, is pretty good for something that is quite a way out of my comfort zone. I’m not even sure what genre to describe it as, to me it is kind of trance like, with elements of experimental prog, but that probably doesn’t help much if this is your kind of music.  So here’s a link to the Soundcloud page and I will leave it to you, to explore or not to explore.

The opening to track 8 begins to promise something quite grand and sweeping, with lengthy classical sounding string chords, before bursting forth with considerable rage and gusto.  It is ballsy alt rock, passionate and clear vocals, lots of volume changes, riffs, machine gun bursts of snare in frenetic drumming. Not a million miles from Fearless Vampire Killers for example. One Man Boycott is in fact, apparently, one man, Joe Brewer, (from Bristol) although presumably he has some help on this track since it is titled S-H-P feat. Frank Rawle.

The heavy beats and riffs continue on the next track “Diamond White (DEMO)“ which, in all fairness has the feel of a well finished track. It is more alt metal than the previous track with much more screaming and roaring although not in my opinion overdone, and regulars will know I don’t like too much of that sort of thing. The band “Forever Atlantis” are from Barnstaple. They should perhaps beware that there is another band of the same name in Tennessee so they need to work extra hard on getting top Google rankings.

Track 10 “Beds of Many Ghosts” kicks off with more heavy riffs and pacey drums. Oh Captive are another alt rock band, this time from Bristol.

The Alt rock continues on “Stay Awake” from North Devon’s Unnamed Heroes.  This one is a slower number though according to this article reviewing the band’s e.p. “Bi-Polar Bear” they explore the genre pretty fully.

On to track 12 “Friends I never had” from Barnstaple’s  She Called Shotgun They describe themselves as pop punk, along the lines of Blink 182 Sum 42 and that ilk. There are some parental advisory lyrics in this.

Speaking of parental advisory, track 13 marks the halfway point with the “F” word in the title, and inevitably repeated throughout the remainder. Devon Kennedys would certainly appear to be a Dead Kennedys tribute from Devon. Surprisingly there is not much info about the band online.

Track 14 is the heaviest so far. “Pretty Girls Die Just The Same” from Sworn In. The band are from the USA and have supported AFI and The Distillers. It’s not my cup of tea but 40,000 facebook users already like them so they are clearly pleasing some of the people.

Julian Langer provides track 15 titled “You Don’t See The Dark“ which has  a dark sombre melancholy feel, evoking the sense of foreboding of The Doors at their most moody. It has some lovely delicate acoustic guitar work which counterpoints the previous track remarkably well.

Track 16 is Patience from US the band. This is a project of Paul Gates who also provided track 6

The next track “Happy in Autumn” is easily the most pop sounding track with a lovely vocal from Sophie English. Every Road was a side project of Joe Hicks who is also heavily involved with Forever Atlantis, and She Called Shotgun. I really like this track and think maybe the project should be picked up again.

Track 18 has another massive change of genre with “All Glutton, Is” from Zoido. This is actually Robert Ayton who also appears as “Wob Wob Wob” on track 7. Robert was at pains to tell me that the track features a sample from Bideford based musician James Morrish who has a soundcloud page under the name Dysnomia

19 is another rap “You Don’t Care” by Ill-Iteracy. I won’t pretend I like rap, but I can respect good lyrics writing, and some tracks are easier on the ear than others. This one might need checking before airplay inc ase the “N” word is not ok.

Track 20 “Believe” by Inkoded, opens with a funky blues riff and continues in that vein. The vocals are raw to the point that they could almost do with a touch of reverb just to give them some body, although I would be the first to accuse most signed bands of being overproduced.

The first of two tracks from jax is this lovely folk blues number called “Need To Change” Jax is from Bideford and has a wealth of beautiful music on her Soundcloud page. I look forward to writing more about her in the near future.

Track 22 is “You Want To Be Me (Because I got Her)” by Richard Fay. A fairly straightforward rock/pop track that is very radio friendly.

Miles I. Hamer provides the very bluesy “Janet” on track 23 It is cool and laid back, the guitar parts almost akin to early Delta blues, although the vocal has a sophisticated up to date feel brought about by heavy reverb/echo that serves to offset the simple guitar in quite an artistic way.

We are almost at the end of the list now, and it doesn’t really feel like a chore, particularly when the next track is from the immense talent of Johnny Sharp. “Doorbell” is an acoustic instrumental, and it really does take considerable talent for that to be a prospect to relish. I’ve heard many a folk singer guitarist that has left me bored within the first three minutes.
Johnny Sharp plays his guitar with such fluidity that it resembles the ever changing sound of a waterfall on a summer’s day. Another artist that I relish the prospect of doing an in depth article about in the near future.

Chakras provide one last burst of heaviness, with “Love Lust Lunacy”, a tour de force of thrashing, shredding guttural roaring vocals, if you like that sort of thing. I always find I like the music but dislike the vocals intensely on tracks like this. My apologies, I will never get over that.

And so it comes as a huge relief to me personally that the last track is SO amazingly beautiful, stunning, and should be a number one!

Jax, has two tracks on the album partly because this one is a cover.

It is just the most sublime, gorgeous slow lilting feminine version of Guns and Roses all time classic “Sweet Child O’ Mine”

I love every aspect of this, from the subtle piano accompaniment, the much slower pace, and in particular the strange yet somehow right timing of the lyrics that Jax chooses.

I have still got to add some links to some of the listings so this is still to some extent a work in progress.