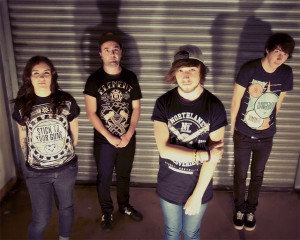 One of many bands on the new unsigned compilation album “Good To Go – No Dramas“ that I reviewed previously. Forever Atlantis are one of three projects featuring Joe Hicks that have tracks on the album.

I am pleased to discover at this point, that they have a bandcamp page, so regular readers will not be in the least bit surprised that I now add an embedded track for you to listen as you read.
(Parental Advisory Lyrics by the way)

There is only the one track on their Bandcamp which is described as a “demo” I am curious to hear how good they will sound when they feel they have mastered and mixed it to their satisfaction because the quality is very good.

The drums sound really great, a lovely woody earthy solid sound, and getting the drum sound right has to be one of the hardest things in recording.  The vocals are superb; ranging from crystal clear with an almost angelic tone, to roaring like a man possessed by demons, and through every point on that journey.
The guitarist shreds his way through riffs and licks and solos with style and speed and, as is so often the case, I really haven’t been in a position to crank up the volume to really appreciate the bass yet, but I have no doubt it is there.
(with apologies to Conal and all other bass players out there – so often you are only really noticed when you stop playing, but we do love you.)

The vocals are delivered with something like an American accent, which could lead anyone to believe this is a US band, but they are actually based in North Devon. Nevertheless, the style of music so lends itself to a western drawl that it doesn’t seem out of place. These guys would go down very well across the pond.

This is evidently a fairly new project so there isn’t a whole heap to tell you about. Forever Atlantis Facebook page has contact details and such like. At the moment there doesn’t appear to be a website, but they do have a Youtube channel albeit with the same track as its only video.

Joe Hicks is also involved with another rock band She Called Shotgun, whose track “Friends I Never Had” is on this compilation, and his third contribution was from a side project called Every Road, and the track is titled “Happy in Autumn” I’ll be writing about them in the near future as well.