Us – the band and Paul Gates

Introducing US – the band
and singer Paul Gates

US the band logo

I have known Paul Gates since not long after I moved to Ilfracombe. He was in one of the first bands I saw playing at The Chill Bar, at open mic nights there.

US (which is frankly a terrible name for a band by almost any criteria you chose) were, indeed still are, made up of Johnny Moroco (a.k.a. Besty) on drums, Colin McGregor on bass, and Harvey Hudson on guitar, with Paul on lead vocals.

It was a good way to be introduced to the North Devon music scene, the songs were pop/rock (and sometimes reggae) with a ton of class.
Nobody, seeing Harvey play for the first time, could fail to be impressed; and Paul has a great presence, totally dominating any stage he takes to.

Here’s some of their stuff to listen to from their Reverbnation page, where they are currently #9 in their local chart.

Learn how to get a song on itunes at ReverbNation.com

I had been under the impression that US was no longer active as a band, but it turns out that this is just a hiatus. Paul assured me recently that they are very much still together and taking bookings.

There is a Youtube channel, with three videos, all covers and filmed with a single, hand held, camera, so the sound quality is not that great. Check them out if you wish here. 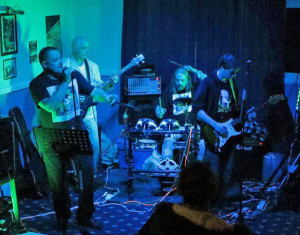 As it happens I stopped writing this last night to go out to an open mic run by another friend of mine whose birthday was yesterday (1st November) Paul was there and was quite forthcoming about his career as a singer. (As it happens Harvey, Colin, and Besty were all there, along with the birthday boy Peter Bradshaw, hosting the open mic and presumably Paul sang with them at some point, although I left early as my ankle was still painful from my fall earlier in the week.)

The track “Patience” was written and recorded relatively recently by the band, with writing credits for Paul Gates and Harvey Hudson, however, the song In Your World is actually twenty years old and was part of a demo album that Paul put together when he went to seek a recording contract in London.

A meeting with no less a personage than Pete Waterman led to a call back several weeks later which meant a long trek for Paul back to Devon and then returning to London, only to be told, at the second meeting, that he wasn’t what they were looking for.

Waterman did however take Paul’s phone number scrawled on the back of a Rizla packet, and Paul assumed this was the last he would hear, until he got a call inviting him to audition for another record company. This resulted in a recording contract with Arista Records for a young exec named Simon Cowell.

The song “In Your World” however, remained unreleased and has not been properly given an airing until it’s inclusion on this album. I was immediately struck by the late eighties feel of the track, which makes a lot of sense when you realise it was recorded in 1992. It evokes the era of “Drive” by The Cars, which I’m sure you will agree is no bad thing.

Tagged with: devon, Good to go - No Dramas, North Devon, original, Paul Gates, recording, rock, unsigned, US, Us The Band