Third of four artists who commented on this blog. I love getting genuine comments from real people, if only because there are always a hundred times more spam comments than genuine ones.

Catrine commented on the “Unsigned Bands” page as follows,

Hi there
my name is Catrine…one half of duo starseedz. We have been playing and recording and making a bit of an impact in north london. Would love you to pop by our soundcloud and have a listen and perhaps play a tune or two

There are a frightening 19 tracks on their Soundcloud page but I am going to start you off with this lovely video that I found on Catrine’s own Youtube channel.

Little Bird is a very pretty song with a lovely melody, incorporating some sublime blue notes and a slightly sixties feel.  The video, as you can see is well made and really embellishes the music in my opinion. 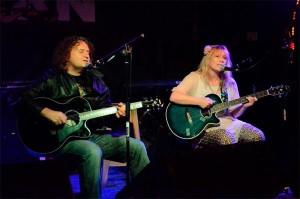 Just a little aside here. You know those annoying adverts that YouTube puts on a lot of videos.  Well, if you can stand to watch them sometimes, it does help the bands to make a little bit of money.
As it happens the one that came on for me was a trailer for a film called Last Vegas which looked really good. First time in ages I have wanted to go and see a movie.

So anyway, if you like what you hear on the video, then there is no shortage of material to investigate further on Soundcloud. The band also has a proper dedicated official website. Something I think all bands should have.

I can certainly concur, Catrine’s voice is very sweet, almost childlike, whilst having an adult’s control.

In contrast to  “Nasty Little Lonely” who I was reviewing yesterday, the vocals are served up pretty much unadulterated. Catrine sounds much like I imagine Charlie (lead singer of NLL) would sound before the distortion is added.  I like both approaches; however I personally prefer to hear the singer au naturel. (That’s HEAR, just hear!)

The melodies are thoughtful as well. I’m not sufficiently knowledgeable of musical theory or terminology to explain myself well but it’s the sort of thing you get from the Mama and Papas, for example, I think it might just be switching to the minor key or “blue notes” I just know I love it, it makes hairs stand up and give me goose bumps.

Starseedz was born when Catrine and Jon fell hopelessly in love. Unfortunately it meant leaving the band [they were in] as the other members were their partners.

Wow. I bet that was awkward.

Starseedz released their debut “Starchild” early in 2012 and the follow up MerKaba was in late 2012. Here it is, available from their Bandcamp page for a mere fiver. Well worth it.