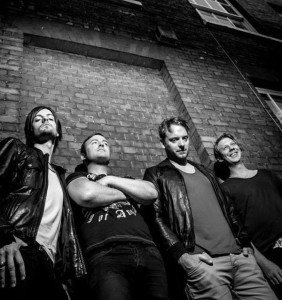 PLEASE NOTE : I first began this article before Christmas and have had a few more attempts to finish it since then. My attention span is variable. As a result some of this may not make a ton of sense.

I feel like a bit of a fraud sometimes, doing this. After all, I am often writing about bands which I hardly know any more about than you do. In fact if you are reading this as a fan of the band, or even as a member of the band, then you will know a load more than I do.

So when I say I am introducing a band I am as much introducing them to myself as I am to you.

My first introduction to this band was via a message sent to the Facebook page for this blog, by Chris Scott.  He said

Came across your blog and thought I’d give you a shout. I’m the drummer for 6 Minutes to Sunrise, an Alternative Indie band from Southampton, we have just finished recording at Monnow Valley Studios in wales and received the final master from Abbey Road Studios London. I’d really appreciate if you could have a listen and let me know your thoughts.

Well of course you expect good things if an album has passed through the hallowed portals of Abbey Road.  Chris goes on to say,

We have been gigging and writing for around 18 Months … have been featured on BBC Introducing South and have played with some great bands, including Howler, Sound of Guns and on Friday Natives. …  We are also due to be featured in the Southampton Music magazine as ones to watch in December.

I was at a bit of a low ebb when he wrote and I hadn’t been very active on here. I was certainly interested but didn’t feel in the mood to check them out straight away. We exchanged a few messages about stuff and I promised to get onto it when I got my Mojo back.

So here I am, and I am very much impressed.  The band are, broadly speaking, alt rock / alt indie, the vocals are crisp and warm and smooth, like hot mince pies with double cream (it was Christmas when I first wrote this. I’m not wasting a metaphor like that now)

Yep, I know what you’re thinking, “shut up, talking about the music and just embed some tracks.”  OK, it’s a fair cop. Here you go; from their Soundcloud page.  My Favourite Fantasy.

This is the track that Chris shared with me first so presumably he would like you to hear it as well. Indeed on their Facebook page it does say it is their new single. 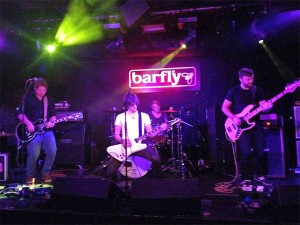 6 Minutes To Sundown on stage

Right, here’s the line up of the band for you

The band have sound files on Reverb Nation including some that you can purchase.
I haven’t found a Bandcamp for them yet.
There is a Twitter account if you want to follow them

In terms of this article, I am most ashamed. To think that between starting writing this, and now when I am about to hit “publish”, I have written about various album tracks from “Journey Through Genres”, raved about another South coast band “Saints Of Sin”,  and promoted my radio show and this blog; and all that time I kept putting off finishing this item, even though it was largely done and dusted.

I do hope Chris can forgive me.