Until Day Breaks by Expected Boy

Expected Boy sound a bit like a Californian punk band but with an English lead singer, so it is perhaps a little UN-expected that they are in fact from Hyvinkää in … nope, I don’t know either.

Right, I checked and it is in Finland. It is famous for ….. erm, the Finnish Railway Museum and the home of KONE elevators. And now also for the band Expected Boy who, as it happens are touring in the UK from 17th to 23rd March.

“Until Day Breaks I know we will be safe,
they say I live this way until the day I die
I’m a vampire!“

It’s good solid music with a slightly off kilter vocal that is endearing yet dangerous.  You can check it out here at their Soundcloud Page 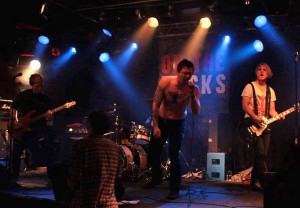 The band were formed in 2011 and they also have a Reverb Nation page with a few tracks available to stream.